For information on the original show, see Animaniacs

Animaniacs is an animated slapstick comedy series for Hulu, produced by Amblin Entertainmentand Warner Bros. Animation. It is a revival of the 90s television series of the same name. The series sees the return of Yakko, Wakko and Dot as they wreck havoc in Warner Bros. Studios and more places, and Pinky and The Brain as they try to take over the world.

Plans for a revival began as early as 2017, where Amblin and Warner Bros. were interested in reviving multiple old properties. The reboot was officially announced in 2018 for a two-season run on Hulu alongside said service acquiring the streaming rights for Animaniacs, Tiny Toon Adventures, Pinky and the Brain and Pinky, Elmyra and the Brain. The 1st season was released on November 20, 2020, with the second season expected to premiere in 2021.

They're back! have a great time wreaking havoc and mayhem in the lives of everyone they meet. After returning to their beloved home, the Warner Bros. Water Tower, the Animaniacs waste no time in causing chaos and comic confusion as they run loose through the studio and beyond, turning the world into their personal playground. Joining will also return to continue their quest for world domination in each of the 13 episodes.[1][2]

The following studios were confirmed to be animating the show at the Ottawa Animation Festival:

Crew-members who worked on the original show are bolded in desktop mode.

In 2017, there was an announcement that Animaniacs is getting a reboot expected to be led by Steven Spielberg and made by Amblin TV and Warner Bros. Entertainment, as before.[17] A contributing factor is due to the show experiencing a popularity surge on Netflix. On October 1st, 2017, Netflix removed the original show to make room for other titles (it is commonly theorized they removed the show due to losing the bidding-war for reboot rights to Hulu) . In addition, Rob Paulsen and Randy Rogel’s successful Animaniacs Live! concerts were also instrumental in reviving the series as it helped keep the show popular.

In 2018, Amblin announced that Animaniacs was renewed for two more seasons which will air on Hulu.[18] If the show has good viewership ratings, more may be picked up later. In the meantime, Warner Bros. has given streaming rights to Hulu for Tiny Toon Adventures (The Plucky Duck Show included), Animaniacs, Pinky and the Brain, and Pinky, Elmyra and the Brain, all of which were available for streaming on Netflix in different territories at some point until 2017. However, Freakazoid!, another Spielberg/WB cartoon, was not included in the deal.

As of early June 2018, [19] the pilot episode's script was completed and as of July 12th, 2018, [20] storyboarding and production has officially started. On August 9th, 2018, an interview with Rob Paulsen revealed that there will be 26 new half-hour episodes of the show, and the new season would most likely air in the Fall of 2020. [21] At the time, it was stated that it was unknown whether the original voice actors would return or their roles would be recast.

In the 157th episode of the fan podcast "Animanicast" on August 18th, 2019; new details were revealed on how the process was coming along.[22] According to a summed-up version,[23] it's planned that the reboot will be released in September 14, 2020 as opposed to the Fall, Randy Rogel has returned to write (most likely songs) for the show, Steve and Julie Bernstein have returned to compose, and two new songwriters have been hired and have tweeted their involvement. There has been no mention of Slappy Squirrel or Goodfeathers segments being included yet, but there are some new "Good Idea, Bad Idea"-like segments, the original voice actors possibly being involved due to strong hints from Paulsen and LaMarche (but still unconfirmed at the time due to NDA), and an Instagram post from Carlos Alazraqui with him in a recording studio with Paulsen, Jess Harnell and Tress MacNeille that may indicate him being involved in the reboot as well.

On October 8th, 2019, in Paulsen's book "Voice Lessons", [24] it was confirmed that he, Harnell, MacNeille and LaMarche were working on the show and returned to provide voices for it, including for Yakko, Wakko, Dot, Pinky and the Brain. On January 25, 2020, Steve Bernstein returned to conduction with the show’s first scoring session, with a leaked image of the new Animaniacs. The show is mostly scored at the same Eastwood Soundstage as the original.

In March 2020, several crew members behind the show confirmed on Twitter that they were now working on the show from home due to the ongoing COVID-19 Pandemic shutting down the studio. [25] The show was also menitoned along with numerous other animated series that are still continuing production amidst the virus in a Deadline article. [26]

Likewise on May 2nd, 2020, Rob Paulsen confirmed on his Instagram Live stream that the cast is recording some lines from their homes. He also reaffirmed the Fall 2020 release window. It’s currently unknown if scoring is being done remotely as well.

On June 11, 2020, Rob Paulsen said in an Ask Fandom livestream that the estimated release window as of now is September-October, but no exact date due to COVID-19. He also confirmed the show is a revival and that the Warners have been locked away in the tower since the 90s ("They are self-aware that they had been locked-down for 25 years"). [27] [28]

In an interview with Animation Magazine, Rob Paulsen confirmed that as of July 2020 the show is now in post-production. He also confirmed that Squit and Dr. Scratchansniff will be returning. New ancillary characters will also be introduced.[29]

The following was revealed:

On August 6, Maurice LaMarche tweeted that information on the reboot will be posted onto Hulu's Twitter page the following day. New information was indeed announced, including the release date of November 20th, 2020.

On September 6, a Animaniacs panel was held at Dragon Con. While no footage of the reboot was shown, the cast did drop a few tibits about the reboot.

The Animanicast did confirm that footage for the reboot will be shown at New York Comic Con in October.

On September 9, a panel for Animaniacs was officially announced for New York Comic Con by Hulu. The logo for the reboot was also revealed by Hulu.

On September 13th, the anniversary of the first episode of the original series, a behind the scenes video was posted to Hulu’s social media accounts and Warner Bros. Kids’ YouTube channel previewing footage of the new intro, some animatics, lines and a script.

On October 2nd, new information was revealed at the Ottawa Animation Festival. This included numerous different designs for the Warners, episode structures, background paintings, and teases on what to expect. [32] The official Twitter and Instagram pages for the show went live on October 9th. Two days later, the NYCC panel was streamed along with a preview clip spoofing Jurassic Park. [33] The trailer went live on October 21st (it can be viewed in the video gallery below), along with a press release containing episode descriptions. [34]

These are earlier promotional materials.

Production art of the new designs compared to the older designs. 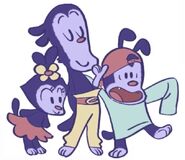 Prototype redesigns of the Warners

Prototype redesigns of the Warners with big noses. 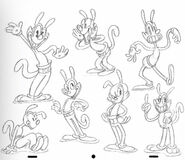 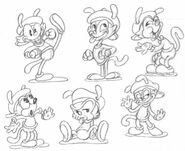 A breakdown on how Yakko’s facial expressions should and shouldn’t work in the new series.

Leaks related to the show, both of series screenshots and promotional materials. 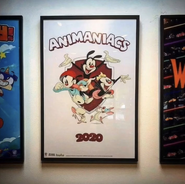 Earlier look at the initial teaser poster as seen inside Warner Bros. Animation.

Leak from the YouTube page of an animator from Snipple Animation Studios, circa April 2019.

Leak from a scoring session conducted on January 24th, 2020.

Poster leak from within the WB Studios of everyone’s favorite show, Little Ellen.

A leak of the more recent poster. It’s not Little Ellen, but it will do.
Add a photo to this gallery

Promotional material made closer to (and during) the release of the show such as posters and prints.

A promo for an official Q&A answered by the Warners on Twitter. 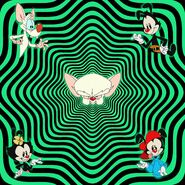 Poster for the show as seen on Canadian TV listings. Due to Hulu being unavailable in Canada, the Hulu branding is not used here.

The Goodfeathers, Slappy Squirrel and other characters who do not have segments return in Episode 5

Chicken Boo
Add a photo to this gallery

Retrieved from "https://animaniacs.fandom.com/wiki/Animaniacs_(2020_TV_series)?oldid=39612"
Community content is available under CC-BY-SA unless otherwise noted.