If you're looking for the Super NES version of "Animaniacs", go here.

For other uses of the term Animaniacs; click here

Animaniacs is a platforming game that was released on May 14th, 1994, made for the Sega Genesis (Mega Drive in other countries), developed and published by Konami. It is a game based on the TV series of the same name, and is the first Animaniacs video game. In this game, the Warner trio (Yakko, Wakko and Dot) go the search of several movie props for a hip-pop culture shop.

A degraded port for the Nintendo Game Boy was created by Factor 5 and was released in July 1995.

The end shows Brain mumbling of their defeat, but before Brain drags Pinky to prepare for their next evil plan, Yakko suggests them to buy their own store. Pinky and the Brain open their own store in effort to earn enough money for world domination, but however turns out to be a fake ending, with Yakko, Wakko and Dot questioning if they would appear in another video game. Regardless, they are happy and say "Good Night Everybody" to the player. The game ends as the cast of characters and credits roll.

Animaniacs is a 2D platformer game where the Warners must obtain 5 movie props across 5 different movie lots (4 in the Game Boy version), while avoiding enemies such as Ralph the Guard, Pinky and the Brain, stage hazards and etc.

To complete most stages, the Warners must defeat Ralph and then retrieve the favored item, and work together by switching through the siblings to use their special abilities to help with platforming, getting past enemies, outwitting the level bosses, etc. Stars are scattered throughout the game, and an extra life is awarded for every 100 stars collected.

The player cycles between Yakko, Wakko and Dot to progress throughout the levels. Each Warner has one unique action:

The Warners can withstand up to 8 hit points, with their health being represented by their facial expression, which changes depending on how much health they have left. If they are in fit shape, their expression is excited, if they have 6-5 hit points left, their expression is calm, 4-3 is terrified, and 2-1 is tired, with the expression flashing if they are on their last hit point. Each Warner shares the same health state. Finding apples will restore the Warners' health. If the Warners get hurt until their health is zero, the player will lose a life. If the player runs out of lives by the time he/she has no lives remaining, the game is over, and the Warners will be ejected from the sound stage they are currently in, walking towards the Water Tower in pain. The player is given the option to continue their game, as Ralph is about to close the door to the Water Tower. If the player continues, they will escape, and start back at the beginning of the level he/she was currently on. If the player decides not to continue, or if a few seconds pass without any decision, Ralph will lock the Warners in the Water Tower, giving the player a Game Over.

Lives can be obtained by collecting 100 stars, or by collecting golden Warner faces (which alternates depending on which Warner the player is controlling) found in the levels. The amount of lives the player starts with differs between difficulty settings (4 lives on Easy, 2 lives on Normal and none on Hard).

The levels are timed, starting at 300 seconds, and there is a warning in the form of different, faster and tense music once there is only 29 seconds left, but time can be increased by collecting clocks scattered around that add 100 more seconds to the timer. Running out of time also costs a life.

In the first and third levels, there is a bonus game in the form of a roulette wheel, where the player can earn extra stars. The player can bet up to two stars on each character (Pinky gives x2 the stars the player bets, Brain gives x4, Yakko gives x6, Wakko gives x8, and Dot gives x10). If the roulette lands on any of the characters the player had bet on, the player will receive the betted stars multiplied by the amount next to the character. (Pinky gives a max of 4 stars, Brain 8 stars, Yakko 12, Wakko 16, and Dot 20). The higher the multiplier, the less they appear on the wheel, making it harder to land on them. Landing on a character that the player has not betted stars on will result the betted stars being forfeited.

Animaniacs features 7 (5 when not counting the tutorial and final boss stages) stages overall. The first stage is part of a tutorial sequence that begins when the player starts the game, and cannot be revisited once completed. When a stage is completed, the player will go to the Studio Map. The remaining four stages can be played in any order. The fifth stage unlocks once all other stages are completed. When the fifth stage is completed, the final boss fight begins.

At the end of a level or a game over, a password is displayed on screen, which allows the player to continue during a a later session by choosing the Password option on the title screen.

A port of Animaniacs for the Nintendo Game Boy was developed by Factor 5 and published by Konami in 1995.

The Game Boy version of the game is a degraded port with scaled down colors and graphics, with several elements from the Genesis/Mega Drive being either altered or omitted from the Game Boy version, to fit in with the console's limitations and game's cartridge space, such as the game's graphics being degraded and several sections of levels being omitted.

Differences from the Genesis version

Playing the game on the Super Game Boy accessory grants a few special enhancements to the game:

Additionally, the Game Boy version of Animaniacs is one of the few games that disable the Super Game Boy's ability to change colors during gameplay. 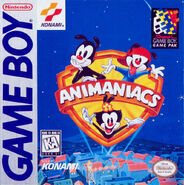 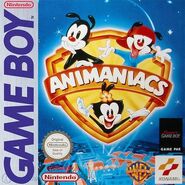 Screenshot of the first stage

Screenshot of the third stage

Pre-release screenshot of the studio stage. Note the different background and debug numbers on the top left. 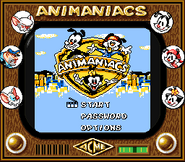 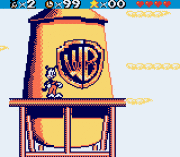 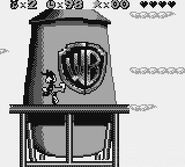