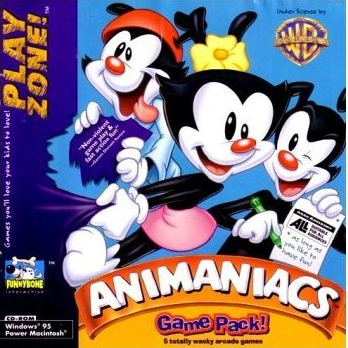 Animaniacs Game Pack is a CD-ROM game based on the show made for the PC, made in 1997 by Funnybone Interactive. This game offers 5 different mini-games inside of it, contains an original intro song with redone lyrics to the tune of the Animaniacs theme song, and has voices by the original actors.

This game is accessed by clicking on the go-kart. In this top-down driving game, the director needs the Warners' help to collect movie props for various films.

You control Yakko Warner on a bicycle collecting as many movie props for the director as you can as fast as you can. You get bonuses depending on how many you get before you get to the end of the stage. There are various enemies and obstacles that will try to damage your vehicle, and you can repair damage and go faster by collecting other vehicles. There is a total of 10 stages. each packed with more enemies than the last, and the goal is to get a high score without depleting your damage meter. You only have one life, so once your damage meter is passes the red dot, the game ends.

The arrow keys move you left and right, and the spacebar makes you jump when you press it.

This is accessed by clicking on the anvil. Yakko, Wakko and Dot are once again forced to be with Baloney the Dinosaur, and it's up to you to help them escape.

You control Wakko and Dot as you guide Yakko to break all of the balloons to get to the next stage, the gameplay resembling "Breakout". Some balloons carry anvils in them, to which if Baloney is hit by them, he is stunned and you get bonus points. Some starred balloons also contain other power-ups, such as freezing everything, turning Yakko into a ball of fire to pass through balloons, turn them all into anvil balloons, 1-ups, etc. Unlike "Breakout", Yakko can actually hit the bottom of the screen and bounce back up to keep going, only if Baloney catches him do you lose a life. Once all of your lives are gone, it's game over. As the levels progress, a pterodactyl will appear to put balloons back to impede your progress, which you can also hit for points.

The game is controlled entirely with the mouse, which moves Wakko and Dot left and right to help Yakko hit the trampoline they hold.

This is accessed by clicking on the heart. After a discussion about smooches vs. anvils between the Warners after a bedtime story by Scratchansniff, Dot falls asleep and starts to dream.

You control Dot Warner in various dream levels, and your goal is to defeat a certain amount of enemies. Each enemy needs different tactics and a different amount of smooches to stun them, then to be touched once to make them disappear. Some enemies will need 2 to 3 smooches to stun, some can block them, some disregard the ground and so on. As the levels progress, the variation and number of enemies needed to be defeated will grow. You have a limited amount of smooches, and you can replenish them them by gathering numbered hearts that randomly pop up. There is also a TNT block in the level that automatically stuns all enemies on screen without any smooches needed, but can only be used twice before disappearing, the effect not unlike the "Mario Bros." POW blocks. You also start with 2 lives, and getting hit once will make you lose a life. Past Level 8, the enemy variety stops and will simply be for score.

The arrow keys move Dot left and right as well as jump, and the spacebar sends out smooches.

You can get to this game by clicking on the golf ball.

After the Warners sing a song about the sport of golf, you play as Dot and your goal is to get the lowest score possible in 9 holes. As the game progresses, there will be added transitions and enemies blocking your path such as crabs, gates, tikis, along with Buttons and Mindy for a cameo.

The game is controlled entirely with the mouse. Moving the cursor determines the direction of the shot, holding down the mouse button starts the power bar, and letting it go sends it back.

This game can be accessed by clicking the robot. Pinky and the Brain have made a robot army to try and take over the world, but the robots rebelled and now have taken the Brain prisoner in Acme Labs, wanting to use the Brain's intelligence to destroy the world instead. After explaining that they can only be defeated by belches, it's up to Wakko to destroy the robots and rescue the Brain, saving the world.

You control Wakko Warner in this top-down adventure game, and your goal is to find the exit in each of the 6 levels to get to the next one, then defeat the Think Tank at the last 7th stage. The robots come in different forms and may need different amounts of belches to defeat. There are various power-ups located throughout the stages in breakable crates and from defeated robots, such as armor to cut damage in half and shields that damage enemies that come into contact with Wakko, food and drink items to give various added but limited effects to your belches, big and small hearts as well as "Nurse-O-Matic"s to replenish health and keys to unlocked colored doors. There are also map devices that can help you navigate the levels, pointing out the locked doors and the exit once you fill it up. As the levels progress, there will be added secret areas, energy doors and Bot Builders that respawn robots infinitely until destroyed, as well as more robots with ranged attacks and so on. Each hit from a robot will take a portion of your health bar away which varies depending on the attack, and once it's gone, as you only have one life, it's game over.

The arrow keys move Wakko in any eight directions. Ctrl fires off a belch, Enter changes the types of belches(If you have any) and Tab brings up the map. These can be remapped at the options menu, as well as being able to change the game speed to up to 4x.

Retrieved from "https://animaniacs.fandom.com/wiki/Animaniacs_Game_Pack?oldid=33765"
Community content is available under CC-BY-SA unless otherwise noted.