The theme song of Animaniacs is, as its title suggests, the song that begins every episode of Animaniacs and its reboot (with the exception of episodes 65 and 83 of the original series). The song describes the set-up of Yakko, Wakko, and Dot's zany adventures and also introduces several of the other major characters on the show (or, in the case of the reboot, poke fun of the modern-day world).

The theme was composed by Richard Stone and the lyrics by creator Tom Ruegger. The original main title was directed by Rich Arons and animated by Tokyo Movie Shinsha (with additional scenes in seasons 3-5 by Wang); while the reboot's main title was animated by Snipple Animation Studios.

The theme has been translated in 21 languages including French (and partially in Freakazoid in Norwegian.)

The intro begins with a shot of the Warner Bros.' water tower. The camera zooms in to the shield of tower, of which the Warners open while singing and jump out. The scene then cuts to Dr. Scratchansniff sitting in while watching a television; the Warners (wearing lab coats) appear and tickle his feet, sending him into hysterical laughter and Yakko sends Scratchansniff crashing into the floor with the lever of the examination chair and the show's title appears with them singing, Yakko and Wakko walk in a silly way along the Warner Bros.' studio lot while Dot hops in.

The siblings do a double take and run with Ralph chasing them with a net. Ralph locks the Warners in the water tower, but they appear on his head under his hat and run away outside the lot. They are hit by the show's title with them singing again. Dot appears posing on a stage, Yakko talks to an annoyed yak, who splashes his face into the soup and Wakko eats food from a truck loading it into his mouth. Bill Clinton is playing a saxophone before the Warners pop out of it. This is replaced with reused animation from "Taming of the Screwy" in Season 2 and later new footage of the Warners paying income tax in Season 3. Yakko plays a bunch of characters from the show (mainly their 'special friends') like a xylophone.

Pinky and the Brain are introduced; they are standing on top of the Earth. The Brain turns on a huge magnet with an awestruck Pinky gazing at the power beam, before Saturn crashes into the two. This is replaced with reused animation of Ralph T. Guard, Dr. Scratchansniff, and Hello Nurse from "Piano Rag", "Ups and Downs", and "De-Zanitized", respectively after Pinky & the Brain recieved their own spin-off. The Goodfeathers are standing on top of a power line; Squit hugs Bobby and Pesto before they are hit by Slappy's purse. Buttons chases Mindy across a steel beam, while Rita sings and Runt smiles while the Warners singing.

Two writers in their office go crazy, Yakko and Dot throw away a script, of which Wakko eats. The cast are then seen walking, and show their contracts. In a lavender background, the Warners appear singing. Backed up by the cast (colored in blue), Dot puts slices of bologna in Yakko's slacks, of which Wakko is pulling. Zooms out with the cast singing in a dark-colored background, a solo happens sung by one of the Warners (sometimes all three of them). The show's logo appears one last time with the Warners singing the show's title (zooming letters), proclaiming "Those are the facts.", and the song ends.

The intro is very much the same as the original series. However, due to the time-skip and the lack of characters, there are a lot of changes in the setup. Instead of tickling Dr. Scratchansniff, the Warners tickle a napping Ralph instead, with Yakko pulling the chair away to send him crashing into the floor (though Scratchansniff still appears in the xylophone line). Also, instead of posing, Dot is seen entertaining the audience with stand-up comedy. After Wakko eats food from the truck, the Warners are seen emerging from their graves (with their year of death being 1998, the year the original series ended), where they are interviewed by a bunch of reporters with microphones, taking photos with devices. The xylophone line has different characters, though Ralph and Dr. Scratchansniff stay.

Pinky gazes at the magnet instead of the beam shooting from it. A boy (resembling Colin) is being tested by a group of executives and Nora Rita Norita while watching television, which falls on top of him. The Warners are sitting scales with Yakko and Wakko outweighing Dot, describing 'gender balance', pictures of the Warners are seen on restroom doors, with half of Yakko and Dot stuck together on one sign, and half of Wakko and Dot stuck together on the other, referencing 'pronoun neutrality', and a shot of the Earth is seen with several 'ethnically diverse' copies of the Warners wearing multicultural attire standing on it with flags above them.

The screen zooms out to reveal it being a video on the computer of someone named the "Graphic Novel Guy". The Warners appear behind him and lift his shirt, revealing an Animaniacs shirt with the siblings' original designs and reading "Est. 1993", referencing the year the original Animaniacs premiered. The Warners are seen walking across a stage. They are then seen signing a contract for 'two new seasons' by Death, who makes the contract disappear afterwards. Instead of usually throwing slices of bologna into Yakko's slacks, Dot is seen slicing a loaf of bologna to produce slices, which fall into the slacks.

The Warners:
It's time for Animaniacs
And we're zany to the max
So just sit back and relax.
You'll laugh till you collapse.
We're Animaniacs

Yakko and Wakko:
Come join the Warner Brothers
Dot:
And the Warner Sister Dot
The Warners:
Just for fun, we run around the Warner movie lot.
They lock us in the tower, whenever we get caught.
But we break loose, and then vamoose, and now you know the plot!

We've got wisecracks by the stacks. (Season 2)
We pay tons of income tax. (Seasons 3-5)

Goodfeathers flock together, Slappy whacks them with her purse.
Buttons chases Mindy, while Rita sings a verse.
The writers flipped, We have no script, Why bother to rehearse?

All:
We're Animaniacs
We have pay-or-play contracts
We're zany to the max There's baloney in our slacks!
We're Animanie
Totally insane-y
[variable line; see the following section (example: Here's the show's name-y)]
Animaniacs! Those are the facts!

The Warners:
It's time for Animaniacs
And we're zany to the max
So just sit back and relax.
You'll laugh till you collapse.
We're Animaniacs

Yakko and Wakko:
Come join the Warner Brothers
Dot:
And the Warner Sister Dot
The Warners:
Just for fun, we run around the Warner movie lot.
They lock us in the tower, whenever we get caught.
But we break loose, and then vamoose, and now you know the plot!

Meet Pinky and the Brain who want to rule the universe.
A brand new cast who tested well in focus group research.
Gender-balanced, pronoun-neutral, and ethnically diverse
The trolls will say we're so passé, but we did meta first

We're Animaniacs
You should see our new contracts
We're zany to the max, There's baloney in our slacks
We're Animanie
Totally insane-y
[variable line; see the following section (example: Have no shame-y)]
Animaniacs! Those are the facts!

This line is the third to last line in the theme song. It is always a different one depending on the show's episode, with another sibling singing it. In some episodes, it's all three of them. They are in the order that they first appeared on the show. In Season 2 of the original series, the variable verse in all the episodes was "here's the show's name-y". So far, Dot has had the most variable lines.

In the story "The Contest", Yakko and Dot sing the last part of theme song. The Variable Verses are:

Three people in the "xylophone" line next to Bob Hope appear to be the Three Stooges: Larry Fine, Curly Howard, and Moe Howard (look for Moe's hair as the giveaway), In the reboot, one of the people resembles Abraham Lincoln.

One of the writers that "flipped" looks like William Shakespeare.

In the 2020 theme, for obvious reasons, the other characters were removed from the intro, leaving only the Warners, Pinky and the Brain, Ralph, and Dr. Scratchansniff. This time, the intro is completely focused on and sung by the Warners, with Pinky and the Brain only appearing in what is left of the roll call lyrics, Ralph only appearing in the first part and some variable lines, and Scratchansniff only appearing in his place in the xylophone line, with Ralph taking his place in the beginning. Nora Rita Norita, Nils Niedhart, The Conductor from "Here Comes Treble", and Dr. Walter Grubb cameo in the xylophone line, taking the places of older antagonists, and Death from "Meatballs or Consequences" appears holding a contract for 'two new seasons', of which the Warners sign.

A character named "Graphic Novel Guy" is shown in the "we did meta first" line, with Mr. Skullhead appearing in a comment on an online message board under the name "Mr. Lul Head" on his computer.

Additionally, a Colin lookalike is used as a test subject for the series' new cast where he is seen connected to wires and watching a television in a test room, which tips over and crushes him.

Meet Pinky and the Brain
Who want to rule the universe.
There's Skippy and there's Slappy
And say hi to Hello Nurse.

"Animaniacs" is translated into other languages as follows:

It's time for Animaniacs!

Just for fun, we run around the Warner movie lot!

There's baloney in our slacks!

We got wisecrack by the stacks.

Pinky and the Brainy

We pay tons of income tax... 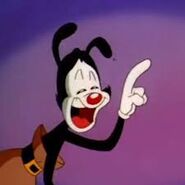 We're zany to the max!

There's baloney in our slacks! (without the entire cast)