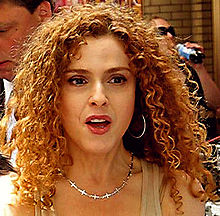 Bernadette Peters (born Bernadette Lazzara; Februrary 28, 1948) is a Tony award winning American actress, singer, and children's book author from Ozone Parks, Queens, New York. She is one of the most critically acclaimed Broadway performers, having received nominations for seven Tony Awards, winning two (plus an honorary award), and nine Drama Desk Awards, winning three. Four of the Broadway cast albums on which she has starred have won Grammy Awards. She wrote a children's book called Stella is a Star, named for her dog, Stella, she founded Broadway Barks and in 2015, she wants to write another book about her rescue dog, Charlie, and how Charlie gets along with her older dog, Stella.

She voiced Rita on Animaniacs and has the status as being the highest profile voice actor on Animaniacs and thus was always credited as "and Bernadette Peters as Rita". The only exception was when she voiced the Cheshire Cat (possibly Rita) in the cartoon "Mindy in Wonderland".

Cheshire Cat
Add a photo to this gallery
Retrieved from "https://animaniacs.fandom.com/wiki/Bernadette_Peters?oldid=32844"
Community content is available under CC-BY-SA unless otherwise noted.