Animaniacs Wiki
Register
Don't have an account?
Sign In
in: Characters, Animals, Slappy The Squirrel Characters,
and 7 more

Candie Chipmunk is a character who appeared in the Slappy Squirrel cartoon, I Got Yer Can. Candie is suggested to be Slappy's next door neighbor, but as she is a one-shot character, it is debatable as to whether she still is or not after that episode.

Although Candie is initially sweet, kind, and tidy, she ends up becoming bitter, obsessive, violent, frightening and insane. At one point, Candie claims to love helping children "less perfect than [herself]", implying that she is somewhat egotistical.

The conflict between the two started when Slappy threw her soda can into Candie's recycle bin, and Candie pettily forced her to remove it. Slappy takes revenge by repeatedly returning the can to Candie. The squirrel eventually causes the chipmunk to snap entirely. After snapping, Candie becomes increasingly violent and paranoid. She demonstrates this change by attempting to blow up a couple of nuns with a grenade and, later, scaring Santa Claus away due to her mistaken belief that they are Slappy in disguise.

Her voice actress is Gail Matthius. 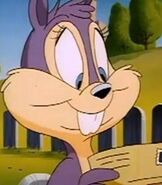 Candie wearing a corn on the cob

Candie with her cartoon teeth.