Chicken Boo is a giant chicken who has a habit of disguising himself as a human. No matter the profession Boo has chosen, he typically excels at it. One person in each cartoon claims he's really a giant chicken, which is dismissed by the other characters in the cartoon.

After Boo's disguise inevitably fails, the naysayer from earlier returns to say "I told you that guy was a chicken!" and Boo is typically shunned or even attacked by those who were praising him just minutes before. But ultimately Boo just brushes it off and walks off into the sunset/moonlight on to his next venture.

In the reboot, Chicken Boo is a recurring character in Yakko, Wakko, and Dot segments, usually being the subject of a surprise twist ending. He pops up when you'll least expect it.

Boo has a mixed-relationship with Yakko, Wakko, Dot. The three siblings once clashed with him when he was staying in the Water Tower, and they often take joy in exposing his disguises. On the other-hand, the kids and Boo seem to have some kind of respect for each other. As “Swifty LaBoo”, Boo served as the Warners’ agent and fought hard to continue their cartoon series despite protests from Thaddeus Plotz. The Warners also invited him to their Big Wrap Party. He also delivered pizza to them once and the kids were grateful he came on time.

By the 2020 series episode "Good Warner Hunting", however, it appears their relationship has soured. Chicken Boo disguised himself as a hunter bent on killing the Warners and mounting their heads on his wall due to being excluded from the reboot. The Warners also had some hurtful comments for Boo, calling him "the least popular character". By "Warner's Ark"; the Warners and Boo appear to be friendlier to each other after allowing Boo to have a starring role as his infant self and show his origin story. Yakko even apologizes for Baby Boo having to endure danger in the cartoon.

The greedy CEO of Warner Bros. Mr. Plotz has a long and contested history with Boo that spans across multiple decades. The two had a notoriously heated argument following the critical and commercial failure of Yankee Doodle Warners that was heard across the entire studio. Boo wanted WB to continue production of the Warners’ cartoon series while Mr. Plotz didn’t want to. In the heat of the argument Boo physically assaulted Mr. Plotz by pecking him in the head, leading to his firing. Even with this setback Boo came back to bring great stress to Mr. Plotz through multiple disguises that Plotz always fell for. He almost bankrupted the studio through his movie Young Blood Squawk, much to the anguish of Mr. Plotz.

Despite this, Plotz does see some of Boo’s disguises as valuable assets such as “Mr. Boo”, the head of the WB Network. Plotz fired Boo however after finding out he was a chicken (and had him kicked out of the window of the WB skyscraper’s top floor!). This further added to the bad-blood between the two. By the end of the series, the long-and-bitter dance between the two continued as Boo seemingly posed as Plotz’s lawyer. Plotz still hasn’t found out if his lawyer is Chicken Boo as he ignored what the Warners told him.

Chicken Boo was infamously romantically-involved with teenage terror Katie Ka-Boom under the disguise of teenage heartthrob (and wrestling captain) “C.B.”. Katie and “C.B.” seemed to get along fine and had a stable relationship until Katie found out he was a giant chicken. She then ended the relationship and kicked him out of her house. Boo didn’t seemed too bothered by this, and casually walked-off as is usual when one of his disguises is exposed. Because of this, it’s unknown if Boo actually had feelings for Katie or was using her to advance the popularity status of “C.B.”. 25 years later, it appears he still bears resentment for Katie as she was among the many characters he had captured and mounted on his wall. Katie also partakes in attacking Boo with the rest of the cast at the end of "Good Warner Hunting" after Boo kidnapped all of them.

Chicken Boo in the Animaniacs Reboot 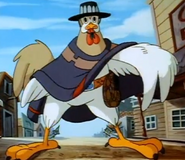 "The Man With No Personality" 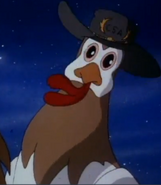 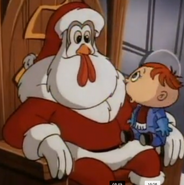 The infamous fight between Swifty LaBoo and Plotz that was heard across the entire studio. 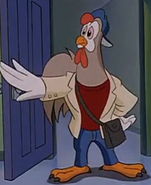 This is Forest, Forest Boo.

Mr. Boo (Again, but this time with Swifty’s design)

Mr. Plotz’s lawyer. This may or may not be Chicken Boo in disguise.

“Emperor C. Boo” on The White House’s Guests of Honor List for a press conference on “The Brain”. 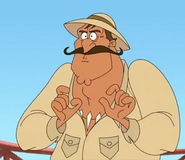