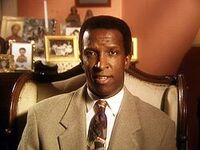 Harewood first attracted attention for his portrayal of Simon Haley (father of author Alex Haley) in the ABC miniseries Roots: The Next Generations. He is known for his roles in Full Metal Jacket, for starring as Jesse Owens in The Jesse Owens Story, and for his co-starring role in the ABC Television series Strike Force (starring Robert Stack). In 1994, he was awarded the NAACP Image Award for Outstanding Actor in a Drama Series, Mini-Series or Television Movie, for his recurring role as jazz/blues saxophonist Clarence "Cool Papa" Charleston on the NBC drama series I'll Fly Away. In 1995, he co-starred in the Warren Chaney docudrama, America: A Call to Greatness.[1][2] In 2012, he is an announcer for NBC.[3] He also played Dr. Julian Wilkes in the NBC (later syndicated) TV series Viper.

Retrieved from "https://animaniacs.fandom.com/wiki/Dorian_Harewood?oldid=27580"
Community content is available under CC-BY-SA unless otherwise noted.