Animaniacs Wiki
Register
Don't have an account?
Sign In
Advertisement
in: Characters, Humans, Yakko, Wakko, and Dot Characters,
and 7 more

"He knows our motivations, that's what he'd like to think! He's Dr. Scratchansniff, the studio shrink!"
— Yakko, Wakko and Dot

Dr. Otto von Scratchansniff (usually referred to as just Dr. Scratchansniff and Scratchy by the Warners) is the psychiatrist at Warner Bros. studios who speaks with a thick Austrian-German accent. He is the one charged with keeping an eye on the Warner brothers (and the Warner sister). Scratchy was one of the greatest psychiatrists in Hollywood before the Warners arrived. Since then, he has been driven to the brink of insanity occasionally because of them.

His voice is provided by Rob Paulsen.

He once had gray hair, but he ripped it off due to the Warners driving him to insanity in his sessions with them, which is why he is now bald. He wears a white smock, purple pants, black shoes, and glasses. His eyes were never shown, but Dot says they are blue in The Monkey Song.

In the reboot series, he has a longer nose and pointier chin, dons a more detailed labcoat, and has five fingers on each hand instead of four.

He is a regular character in the Warner sketches, usually as the victim of their antics. However, some shorts feature Scratchansniff as a sort of surrogate father to the Warner siblings, doing activities such as making them food and taking them to the circus (as shown in I'm Mad). However, he doesn't like being seen as such, insisting that he is nothing more than their psychiatrist, but the Warners will sometimes call him "father" or "daddy" just to mess around and annoy him for the fun of it. He is highly allergic to poison oak, as seen in The Sound of Warners. Scratchansniff is attracted to large women as shown in Drive-Insane and Anchors A-Warners.

He has worked at Warner Bros. for more than fifty years, implying that he must be at least in his mid-70s (possibly even older by the time of the reboot), despite his relatively spry demeanor (especially when the Warners drive him up the wall). His patients over the years have included Edward G. Robinson, Peter Lorre, Better Davis, Rex Harrison, the Invisible Man, Jack Nicholson, Cher, Clint Eastwood, Michael Keaton, and Ronald Reagan. He occasionally uses a puppet modeled after him, named Mr. Puppet Head, when treating children to help them talk about their feelings.

In the 22 years since the original Animaniacs ended, it appears that the gradual exposure to the Warners finally broke him. Come "Hindenburg Cola", Scratchansniff has become dead-set on upstaging the Warners and making them pay for their zany antics, proclaiming himself to be "the new und improved Dr. Otto von Scratchansniff". His obsession has become so dangerous that he ends up injuring himself trying to "prank" the Warners. He has also become more accustomed to lying.

It's currently unknown if his upstaging-obsession will end or continue in future episodes of the reboot. Either way, Scratchansniff will most likely continue to be subjected to comical cartoon violence. 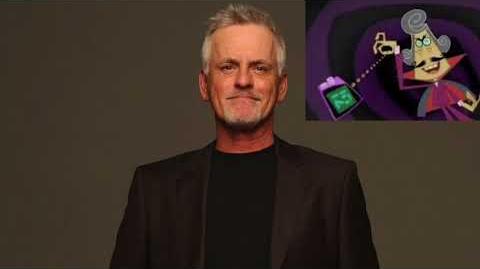 A photo of Scratchansniff in his youth, meeting Batman (Michael Keaton)

Scratchansniff on the ground after leaving a hole in the wall

Yakko in the doctor's arms

Dr. Scratchansniff with a puppet

Scratchansniff pulling out his hair with frustration

Scratchansniff ripping out his hair in frustration, trying to explain the difference between on your mind and on your head 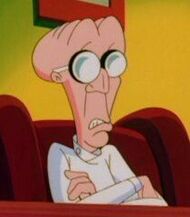 Dr. Scratchansniff about to open a shaken can of Hindenburg Cola with a malicious grin on his face.