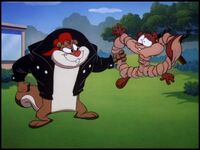 Duke The Squirrel who picks on Skippy the squirrel and he was voiced by Corey Burton.

Skippy attempts to use non violent solutions advice from his school counselor to deal with Duke instead of his Aunt's brand of exaggerated cartoon violence due to them being under watch by the FTA. Skippy attempts to ignore him, share with him, and be friends but none of it works and end with Duke beating him up. Skippy finally uses his Aunt's methods and using the non-violent advice again. Duke is shown the error of his ways by being dropped up and down with a giant magnet, blown up with a TNT booby-trapped radio, and sent up in the air with a rocket that explodes into a fireworks show. Duke finally reforms and starts wears a schoolboy outfit and thinks Skippy and Slappy for showing him the error of his ways and helps put together her new educational and nonviolent problem solver.

Retrieved from "https://animaniacs.fandom.com/wiki/Duke_The_Squirrel?oldid=27987"
Community content is available under CC-BY-SA unless otherwise noted.