Animaniacs Wiki
Register
Don't have an account?
Sign In
Advertisement
in: Characters, Pinky, Elmyra and the Brain Characters, Humans,
and 8 more

"I'm gonna hug you and squeeze you into itty-bitty pieces!"

Elmyra Duff is the secondary antagonist of Tiny Toon Adventures, and the deuteragonist of Pinky, Elmyra and the Brain. She lives in Acme Acres and as in the original series, attended Acme Looniversity. She’s based superficially on her name derivative and mentor, Elmer Fudd. She is voiced by Cree Summer.

Elmyra made a guest appearance on the original Animaniacs in the segment "Lookit the Fuzzyheads", where it was revealed she was another one of Dr. Scratchansniff's patients. Mistaking Yakko, Wakko, and Dot for puppies, she chased them around until the Warners tricked her into chasing after Mindy instead (and saving Buttons the trouble of doing so himself). She also made cameos in "The Warners' 65th Anniversary Special" and "A Hard Day's Warners".

However, Elmyra's most prominent connection with Animaniacs was starring alongside Pinky and The Brain in the infamous spin-off Pinky, Elmyra and the Brain. In the theme song to that series, Elmyra ends up buying the two mice along with a turtle named Mr. Shellbutt while they were trying to hide out from Wally Faust. Unlike in Tiny Toons, Elmyra now attends Chuck Norris Grammar School and now has a crush on Rudy Mookich (it’s never mentioned what happened to her old crush, Montana Max). However, as of the Animaniacs reboot segment "Of Mice and Memes," the spin-off was written off as being non-canon.

In the reboot, she was mentioned in "Gift Rapper" during the Rap Battle when Jay-Pac states that Wakko is less likable than her.

Elmyra is a young, overly affectionate 12-year-old female human with short orange-red hair in a reverse bob-cut and black eyes. She wears a light blue short-sleeved blouse with a white collar and frilly cuffs, a matching bowed ribbon in her hair that has an animal's skull in the middle, white pleated knee-length skirt, frilly light blue (with or without red hearts), pink or white panties, a matching training bra, white ankle-high socks and black strapped Mary-Jane shoes.

Whereas Elmer Fudd was a hunter who usually tried to kill Bugs Bunny or Daffy Duck, Elmyra is obsessed with animals and cute things, but always causes great discomfort or serious injury to her potential pets from her overenthusiastic affection and complete lack of even the most rudimentary knowledge of pet care. In spite of all of that, she is actually a sweet little girl who means no harm to her 'victims' (except for the Tiny Toon Spring Break special, where she seems to be aware of her treatment to animals and takes pleasure in doing so). 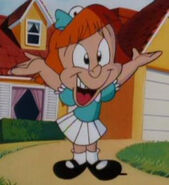