King Yakko is the tenth episode of Animaniacs. After Taming of the Screwy, it is the second episode where the story takes up the entire episode. 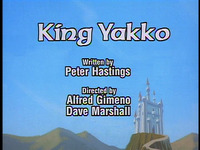 Yakko becomes the heir apparent to the small kingdom of Anvilania. However, a dictator declares war on the kingdom.

Retrieved from "https://animaniacs.fandom.com/wiki/Episode_10:_King_Yakko?oldid=35024"
Community content is available under CC-BY-SA unless otherwise noted.