"No Pain, No Painting/Les Miseranimals" is the 11th episode of the original Animaniacs. It originally aired on September 27th, 1993.

The Warners escape the water tower by giant bubble.

No Pain, No Painting 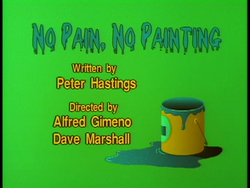 The Warners audition as models for noted painter Pablo Picasso, who is attempting to find a new style of painting.

Dot: I would be a great model. What does Christie Brinkley have that I don't have?
Yakko and Wakko: Billy Joel?

Yakko: Did you know there's "P.P" on your smock?"
Dot: Disgusting!
Pablo Picasso: No, no! P.P. stands for Pablo Picasso!

Pablo Picasso: I painted these in my Blue Period and these in my Rose Period.
Yakko: What is next, your Plaid Period?
Dot is dressed in a tartan
Dot: Plaid? Yah, I can do plaid! 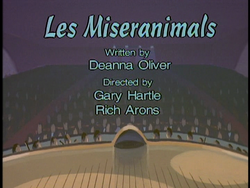 In France, Runt is captured by the Pound (he was set up and wrongly accused of stealing a bone from a guard dog, Camenbert) and Rita is captured along with many other cats by a restaurant that serves no meat. The chef of the restaurant, Tristesse quickly plans to repair his restaurant’s reputation by making all his cats part of a new recipe. The other stray cats (a slightly pudgy yellow cat, an orange cat with dark red stripes, a Tonkinese and a gray/beige kitten in particular) are soon praying for Rita to be put in the recipe.

As Rita waits for her end, it turns out that Runt has escaped the pound and is coming to the rescue with a pack of poodles. During and even after the rescue, Tristesse and Camenbert turn up and attempt to inference, but both meet their comeuppance when Tristesse accidentally causes the pen he kept the stray cats in to collapse next to Camenbert and with him inside. After that, Rita, Runt, the cats and the poodles freely move on to Paris.

The Warners return to the water tower using a flip switch from Wakko's gag bag. When the switch is flipped down, an escalator comes out of the tower. When Ralph flips the switch back up, an anvil falls on his head. The Warners shrug and go back into the tower.