The Warners escape the water tower by skiing a mountain of popcorn. 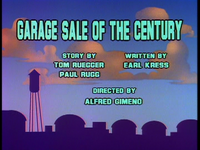 The Warners go to a garage sale to literally buy a garage from a very greedy Pa Bear.

The Warners are in a Chinese restaurant reading their fortunes from their cookies. Wakko's fortune happens to be the next cartoon. 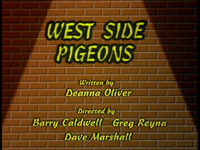 The Goodfeathers star in a parody of West Side Story. While fighting with a rival group of birds, the sparrows, Squit falls in love with one of their members named Carloota.

Retrieved from "https://animaniacs.fandom.com/wiki/Episode_12:_Garage_Sale_of_the_Century/West_Side_Pigeons?oldid=30026"
Community content is available under CC-BY-SA unless otherwise noted.