Animaniacs Wiki
Register
Don't have an account?
Sign In
Advertisement
in: Pages with inline Wikipedia links, Episodes, Season 1,
and 6 more

"Hello Nice Warners/La Behemoth/Little Old Slappy from Pasadena" is the 13th episode of the original Animaniacs. It originally aired on September 29th, 1993. 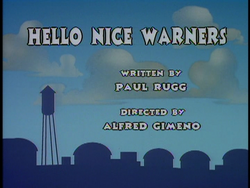 While running from Ralph, the Warners unwittingly find themselves in an audition for Mr. Director's latest film. They try to flee that, but when they see Ralph lurking outside wondering where are they Warners, they are trapped. The Warners will need to go along with the film. 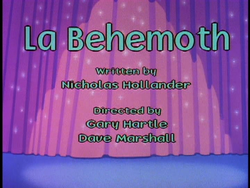 The Hip Hippos operatically try to take care of their mansion after their maid quits. 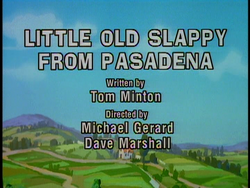 Slappy Squirrel portrays the title character in the Jan & Dean song "The Little Old Lady from Pasadena" while racing across California just to deliver a letter. At the end of the episode she pulls into her driveway, only to see her home covered by multiple squad cars and Slappy getting arrested for reckless driving.