"La La Law/Cat on a Hot Steel Beam" is the 14th episode of the original Animaniacs. It originally aired on September 30th, 1993.

The Mime is trapped in an imaginary box.

A safe then drops on him.

In a parody of L.A. Law‚ the Warners represent Dr. Scratchansniff for a parking ticket violation. In typical Warner fashion, the trial goes totally insane-y! 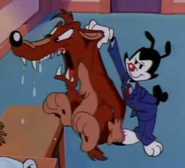 The mime gets tackled by a football team.

Cat on a Hot Steel Beam

Mindy follows Pussyfoot the kitten onto a construction site, while Buttons attempts to keep her out of danger. 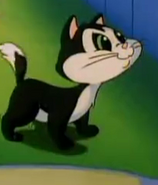 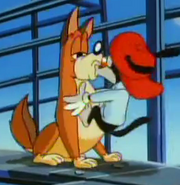 The mime gets squashed by a sandbag.