Both cartons are animated by Wang Film Productions Co., Ltd Except tower escape

The Warners escape the water tower via a human cannonball. 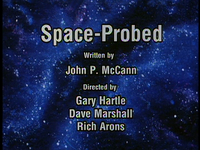 The Warners get abducted by aliens and hilarity ensues.

Yakko Warner: [while chasing Hello Nurse in the space ship] Oh come on, just one little kiss!, I've had all my shots! 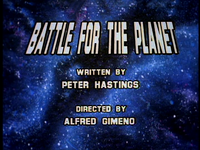 Pinky and the Brain attempt to recreate Orson Welles' infamous War of the Worlds radio drama by televising it. However, the result is not what they have in mind.

The Brain: Pinky, are you pondering what I'm pondering?
Pinky: Wuh, I think so, Brain, but if we didn't have ears, we'd look like weasels.

Retrieved from "https://animaniacs.fandom.com/wiki/Episode_15:_Space_Probed/Battle_for_the_Planet?oldid=35344"
Community content is available under CC-BY-SA unless otherwise noted.