Animaniacs Wiki
Register
Don't have an account?
Sign In
Advertisement
in: Pages with inline Wikipedia links, Animaniacs (2020), Episodes,
and 4 more

Please Submit/The Flawed Couple/Everyday Safety[1] is the 15th episode in the Animaniacs reboot and the 2nd episode in its 2nd season.

The Warners are harassed by spam. Nora must fill the segment time by airing failed, never-before-seen Pinky & The Brain pilots. The Warners give safety advice. [2]

While trying to sign-up for a WB email; the Warners are harassed by internet spam that escapes from the computer.

When the dynamic mouse duo goes missing, Nora showcases never-before-seen Pinky and the Brain pilots to pad-out the show, showcasing 4 decades of television history and the pilots' various faults. Much of the problems with these pilots are shown to be the result of Brain being difficult to work with.

50s-style test card before "The Pinky and the Brain Show"

"The Pinky and the Brain Show" title

The Fresh Pinky of Burbank title 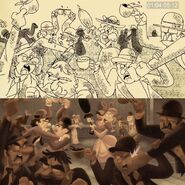 The Warners do a PSA on safety rules. In traditional Warner fashion, the PSA takes a rather bizarre turn.