Chalkboard Bungle/Hurray for Slappy/The Great Wakkorotti: The Master & His Music is the 16th episode of the original Animaniacs. It originally aired on October 4th, 1993. 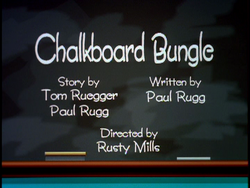 The Warner Bros. studio gets a new strict schoolteacher named Miss Flamiel, whom the Warners cannot help but torment. 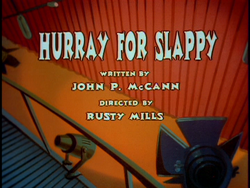 Slappy Squirrel and Skippy Squirrel attend an award ceremony in her honor, but, unbeknownst to her, her old archrivals Walter Wolf, Sid the Squid and Beanie the Brain-Dead Bison are all in attendance to sabotage the ceremony.

Slappy: [to Beanie] You remind me of a very young Betty Boop.

Mary Hartless: Slappy, you just won an award! What are you going to do next?
Slappy: I'm going to... bed!

The Great Wakkorotti: The Master and His Music 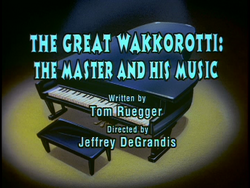 The Great Wakkorotti belches his way through Johann Strauss' The Blue Danube.