Episode 17: Roll Over Beethoven/The Cat and the Fiddle

Episode 17: Roll Over Beethoven/The Cat and the Fiddle

Tired of These Credits-Kathryn Page

Roll Over Beethoven/The Cat and the Fiddle is the 17th episode of the original Animaniacs. It originally aired on October 5th, 1993. 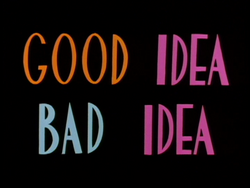 Good Idea:
Playing a piccolo in a marching band.

Bad Idea:
Playing a piano in a marching band. 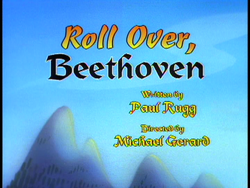 The Warners are chimney sweeps who come over to the home of Ludwig van Beethoven, who is attempting to compose his fifth symphony.

Beethoven: Do you know who I am?
Yakko: No, but maybe if you hum a few bars.
Beethoven: I am Ludwig van Beethoven, world famous composer and pianist.
Yakko: You're a what?
Beethoven: A pianist!
Yakko: Mwah! Goodnight, everybody!
Beethoven: But that is what I am. A pianist!
Yakko: I think we've heard enough out of you. [Washes Beethoven's mouth out with soap]

Bad Idea: Feeding stray kittens in the park to a bear.

"The Bear Went Over the Mountain" is BGM in this cartoon short.

The Cat and the Fiddle 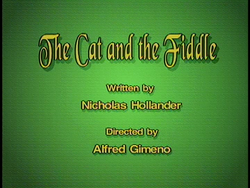 Rita and Runt wander through Italy. Rita gets lured to the front of a new door by the smell of a good meal and the cat and dog find a home with noted violin maker Antonio Stradivari. The violin maker only wants Rita for her catgut to make strings and distracts the suspicious and frightened cat with yarn. The violin maker tries to get rid of Runt by throwing a ball for him to catch with the intent of him getting lost, which turns out to be very difficult.

Before the violin maker can cut up a distracted Rita, Runt breaks through the door and causes a massive mess in the house just to relieve the ball. The maker looks to his broken violins and angrily yells at the cat and dog to get out, to which the two strays flee.