Every single cartoon in this episode has to do with Russian culture. 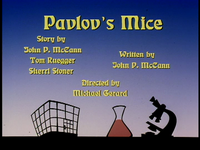 In Russia of 1904, Pinky and the Brain attempt to steal the Czar's crown jewels so they can take over Russia. When Pinky points out that the jewels are guarded by fierce soldiers known as Cossacks, Brain says that is no problem as a lunar eclipse will occur that night, making everywhere so dark no one can see anything, as such they can sneak into the treasury without the Cossacks' knowledge. Only one other problem stands in their way, Brian always reacts to a gong and Pinky dances whenever a bell rings. 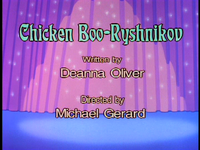 The Warners escape from the water tower via a sky gondola.

Nothing But the Tooth 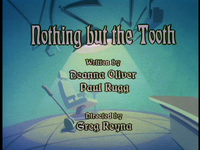 The Warners are Rasputin's dentists when he comes down with a toothache, causing him no end of misery. When Rasputin attempts to rid the Warners by having the Tsar arrest them, his teeth fall out, rendering his hypnosis ineffective. The Tsar kicks Rasputin out and thanks the Warners for saving Russia.

The moral of today's show is: "Brush your teeth after every meal. This moral brought to you by the American Dental Association."

The Warners return to the water tower via a magic carpet from Wakko's gag bag. When Ralph attempts to fly on the carpet, an anvil falls on him. The Warners just shrug and go back into the tower.

Retrieved from "https://animaniacs.fandom.com/wiki/Episode_18:_Pavlov%27s_Mice/Chicken_Boo-Ryshnikov/Nothing_But_the_Tooth?oldid=30025"
Community content is available under CC-BY-SA unless otherwise noted.