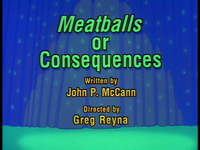 It starts with the Warners in a meatball eating contest in Sweden, and an overstuffed Wakko is only one meatball away from winning. He jokingly says "Honest, guys, if I eat one more I'm gonna die". Watching from a distance is the Grim Reaper, who is reading a book titled Robert's Rules of Death and declares Wakko's time is almost up. Wakko does eat that meatball and win, but Death materializes in front of the Warners and slaps a sticker reading "Kaput" on Wakko's hat, putting the animaniac in a coma. The Grim Reaper then declares he will take Wakko away, but due to being his siblings and friends, Yakko and Dot beg him to not do so, to which Death says he can't as Wakko is officially "dead". Yakko and Dot then tearfully declare they want to tag along, but Death says it is against the rules and tells them to stop acting like big babies. Yakko and Dot then say "We are not big babies, these are big babies!" and arrive with giant human babies. The Reaper relents and lets them come along. In the netherworld, which Dot thinks is like Ohio, Death challenges them to a life-or-death game of chess, with Wakko as the prize, which is changed to checkers as Yakko can't play chess (although Dot would prefer to play Uncle Wiggly or Candy Land) and they start to play. The Grim Reaper is skilled at it, so the Warners cheat, and so Death declares them dead, too, which they don't mind as they can have Death as their "dadoo". They then ride the Reaper off a cliff, and he lets them live. Back on Earth, they do a speech on family and living life to the fullest. 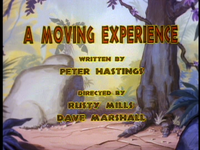 The Hip Hippos move away from the jungle to the city, but Gina Embryo, who is studying them, attempts to prevent them from doing so.

Retrieved from "https://animaniacs.fandom.com/wiki/Episode_19:_Meatballs_or_Consequences/A_Moving_Experience?oldid=29553"
Community content is available under CC-BY-SA unless otherwise noted.