The first episode of Animaniacs. The show premiered on September 13, 1993 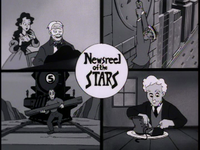 A newsreel is shown explaining the origin of the Warners. They were first created in 1930 in Hollywood at the Warner Bros. then-new animation department. However, they were uncontrollable and ran amok all over the Warner Bros. Studios. until they were captured. Their cartoons were locked away in a vault unreleased, and the Warners were locked away in the studio water tower unreleased....until the present day, when they escaped. 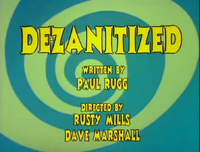 Dr. Scratchansniff explains how he first attempted to make the Warners sane after they escaped from the water tower, and how he lost his hair in the process. After his first encounter with the kids, the good doc is ordered by the CEO, Thaddeus Plotz, to keep the zany kids under control. After one unsuccessful try with the siblings together, he decides to talk with them separately, with no success either. 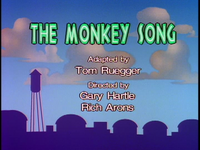 Dr. Scratchansniff, the Warners, and the Hip Hippos sing a re-written version of "The Monkey Song" about the Warners. Squit tries to play the flute throughout the song, but keeps getting beat up by Pesto. 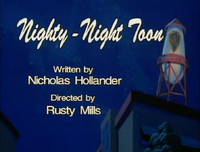 In a parody of Goodnight, Moon, a narrator (voiced by Jim Cummings, using a Winnie-the-Pooh-esque voice) says nighty-night to all of the characters of the series (who are all in the water tower).

Retrieved from "https://animaniacs.fandom.com/wiki/Episode_1:_De-Zanitized/The_Monkey_Song/Nighty-Night_Toon?oldid=31342"
Community content is available under CC-BY-SA unless otherwise noted.