The Warners do a parody of the opening of the
show Alfred Hitchcock Presents, but say, "Flamiel!" like Mr. Director. 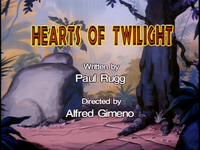 Thaddeus Plotz hires the Warners to stop Mr. Director from making his next film as he has gone insane and overbudget.

See also: Episode 4: Hooked on a Ceiling/Goodfeathers: The Beginning 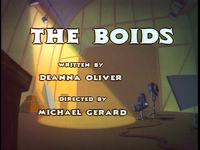 The Goodfeathers, at Bobby's insistance, work as stuntbirds on Alfred Hitchcock's lastest masterpiece.

This episode shows a parody of the 1960s movie, The Birds.

Retrieved from "https://animaniacs.fandom.com/wiki/Episode_20:_Hitchcock_Opening/Hearts_of_Twilight/The_Boids?oldid=38867"
Community content is available under CC-BY-SA unless otherwise noted.