In this infomercial parody, Yakko is the spokesman for a new and affordable product of hair removal. 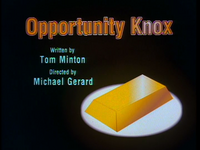 Pinky and the Brain travel by minivan to Fort Knox to take control of all the gold. 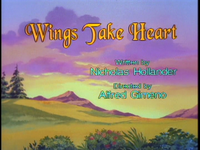 In this miscellaneous silent short, when a male moth and female butterfly fall in love, they head to the city.

The moral of today's story is:
"If you can't say something nice, you're probably at the Ice Capades."

Retrieved from "https://animaniacs.fandom.com/wiki/Episode_24:_Yakko%27s_World_of_Baldness/Opportunity_Knox/Wings_Take_Heart?oldid=30068"
Community content is available under CC-BY-SA unless otherwise noted.