Animaniacs Wiki
Register
Don't have an account?
Sign In
in: Episodes, Season 1, Yakko, Wakko, and Dot Episodes,
and 6 more

Yakko does a parody of the program, Masterpiece Theatre.

Yakko, Wakko and Dot:
How urbaney... 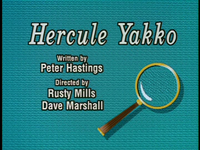 In this parody of Agatha Christie stories, the Warners help find a diamond necklace that was presumably stolen from the Hip Hippos' ship stateroom. Contains the infamous "Finger Prince" joke.

Yakko: Number one sister, dust for prints.
(sometime later)
Dot: I found Prince! (She is seen carrying the eponymous pop star in her arms)
Yakko: No no no, finger prints.
(She looks at the pop star, who smiles.)
Dot: I don't think so.
(She then tosses him out through the porthole.)

Home on De-Nile is the fourth episode of Rita and Runt. 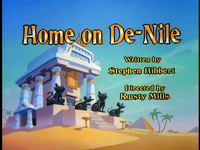 Rita and Runt are travelling to Palm Springs in search of a wealthy man called Sonny Bono since he likes strays. They mistake the place they wind up in for Palm Springs; The place is Ancient Egypt.

They come across the entrance of the palace of the Cleopatra family. Runt seemingly has to defend himself at first, until the guards notice Rita and start worshipping her. They bring Rita before Cleopatra - who’s having trouble finding a worthy cat for an upcoming festival. When she sees Rita, she literally calls her a “give from the Gods.” Rita is adopted by the palace while Runt is taken away to help build a temple in Cleopatra and Rita’s honour.

Rita heavily enjoys the treatment of the palace and forgets about Runt until it turns out they're in the same bed, to Runt’s comfort and Rita’s annoyance.

The festival comes and during a speech, Rita is held by Cleopatra above the pit of fire. Runt is happy for Rita until through listening to Cleopatra's speech and looking through a hieroglyph, does he find out that Rita is to be “sacrificed to the Gods of Harvest.” Runt jumps in and snatches Rita just as she’s thrown. He then escapes from the raged Palace.

Rita and Runt flee "Palm Springs" and begin heading to Vegas. With Runt explaining about the rescue, Rita boasts that she feels “mighty lucky” for the casinos there. 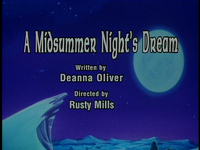 Yakko acts out Puck's final monologue from A Midsummer Night's Dream, with "translation" by Dot. Meanwhile, Wakko gets a little too comfortable with a pixie in the background.

Yakko: Except I'm allergic to anything with lactose in it.