Warner's Ark/The Apology/Narf Over Troubled Water/The Warner's Vault is the 25th episode in the Animaniacs reboot and the 12th episode in its 2nd Season.

The Warners pick up a bunch of stranded, mythical creatures before a flood. The Warners apologize to their viewers. Pinky & Brain try to take over the world with music in the 60's. The Warners revisit some archival footage.[1]

The Warners take in the extra mythological creatures that Noah couldn’t accommodate on Noah's Ark his ark. Trouble arises when an egg is found as Yakko and Dot try to protect it from the hungry passengers (and Wakko!)

Production art from the blog of color designer Kasey Williams

In the 1960's, Brain concocts a new plan that requires black-and-white television sets and music to hypnotize the people. His computer creates a surefire popular tune with the intention of performing it on The Ed Sullivan Show. He and Pinky become a musical duo; "Brain and Narfunkel" to popularize their song and gain the adoration of the public. 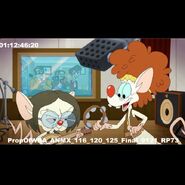 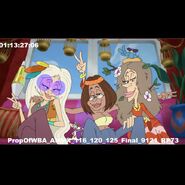 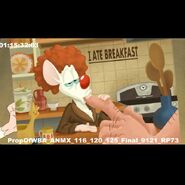 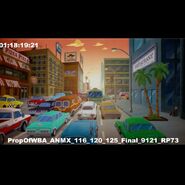 The Warners check out archival footage from their careers.