Animaniacs Wiki
Register
Don't have an account?
Sign In
Advertisement
in: Pages with inline Wikipedia links, Episodes, Season 1,
and 4 more

Sykman tells of the Warners' beginnings in vaudeville, and how Milton Berle really disliked them.

We are shown the Warners' first all-musical sound cartoon from 1930 where they are in a movie theater annoying all the patrons and ushers.

The Warners are watching "Brain Eaters" and Wakko, after drinking a soda called Abyss Boy, notifies Yakko and Dot quietly at first, then loudly that he has to "potty" and runs out of the theatre, declaring the scenario a "potty emergency". When Wakko arrives at the restrooms, he sees that the men's bathroom is out of order. So, he tries to sneak into the ladies' room, but is chased out. He sees a nearby store across the street, and runs towards it. He asks the shopkeeper if he can use the bathroom, but he's told that it is for paying customers only. Wakko states that he doesn't have any money, and the shopkeeper sternly tells him that he can't use the bathroom, but Wakko tries to explain that it's a "Potty Emergency", only to be kicked out of the store (literally).

Angered, Wakko is about to run back into the store to hit the shopkeeper with a mallet, but with his situation getting worse, he says "Maybe later" and drops the mallet. He ducks into several shops, but the shopkeepers kick him out before they even know what he wants. In despair, Wakko dances around awkwardly, and says "Ooh, I have to potty". Wakko then tells himself to try not to think about it, and walks into a nearby park. Inside said park, there are sprinklers, a man watering plants, kids using the drinking fountain, and even a lemonade stand, making Wakko leave the park in desperation. He sees a gas station and tries to get in, only to find that it's locked. The gas station attendant gives him the keys, and Wakko unlocks the door, but the attendant warns him that he hasn't cleaned it in a year and laughs menacingly. When Wakko steps inside, he is horrified by what he sees, and runs out of the bathroom screaming, claiming that the bathroom is too disgusting to use.

When Wakko starts squirming around in the middle of the street, he realizes there's a toilet in his magical Gag Bag. He looks in the bag and happily finds it. He then tries to find a private place to use it. He first tries to go in an alley, but Rita and Runt are there. He then runs into an auditorium, and is about to relieve himself, only for the curtains to expose him in front of a live audience, much to Wakko's humiliation. He then runs to the Himalayan mountains, just when 2 mountain climbers meet him at the top of the mountain. Wakko then returns to outside the theatre, exclaiming "I'm gonna explode!", and runs back in. He then hops into the movie he was watching and uses the bathroom there and finally relieves himself, ruining the movie in the process. After that, he then kisses the villain and thanks him. The episode then ends with the alien stating that Wakko didn't wash his hands.

This episode notably featured deleted scenes. The first of which features the man at the park with the hose turning it away from the camera, with the nozzle not visible. It was first mentioned in a fan community for the show in 1993. [1]

The second scene appears to be an extended ending. Cels and outlines of this deleted scene have surfaced. One shows the Warners walking out of the theater with Dot complaining about something. Another cel shows Wakko looking down at the mallet he discarded and another outlined drawing implies that he attacks the store owners who were rude to him earlier. An "uncut" version of the episode was screened at the 1993 Comic-Con.[2]

Another man (possibly a mafioso, but speaking with a Yiddish accent like Sykman) talks about how the Warners' films were locked away and he heard of how they escaped from the water tower.

He also mentions, again, how Berle disliked the Warners.

Yakko: "Will someone stop this editor from saying 'dragon!'?"
(artist draws a giant anvil that falls on the edit—-ouch...)
Yakko: "Thank you."

He tries to summon the bravest, most daring knight in all the land to slay the beast but ends up with the Warners instead (what a silly mix-up!). As a result, the King unwittingly hires the siblings to save the kingdom instead. 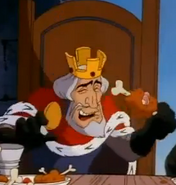