Animaniacs Wiki
Register
Don't have an account?
Sign In
in: Episodes, Season 1, Yakko, Wakko, and Dot Episodes,
and 3 more

Episode 27: You Risk Your Life/I Got Yer Can/Jockey for Position

Dot recites her interpretation of "There Was an Old Woman Who Lived in a Shoe", called "The Shoe."

You Risk Your Life 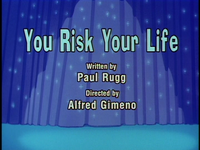 Yakko hosts and Dr. Scratchansniff announces for a parody of the classic Groucho Marx game/talk show "You Bet Your Life" in front of stock footage of a live-action audience. The contestants are Mrs. Myra Puntridge and Aristotle. The secret word is "Yes", and if you say it, Wakko smashes you on the head with a mallet.

I Got Yer Can 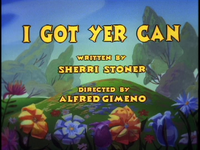 A discarded soda can sparks an escalating, one-sided battle of wits between Slappy and her neighbor, Candie Chipmunk.

Slappy: [about Candie] She reminds me of a very young Wilma Flintstone. 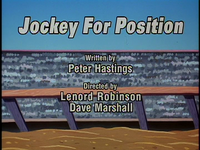 Pinky and the Brain race in the Kentucky Derby to win money for their next plan to take over the world.

The Brain: Tomorrow is the running of the Kentucky Derby. Do you know what that is?
Pinky: Um, a very large hat?
The Brian: Promise me something, Pinky, never breed.
Pinky: I'll try.

Pinky: Can't we just ride the pretty one?
[Referring to Phar Fignewton]
The Brain: Good heavens, they're mulitplying!

The Brain: Pinky, are you pondering what I'm pondering?
Pinky: I think so, Brain, but, uh, isn't Regis Philbin already married?