Good Idea:
Taking a deep breath before
jumping into a swimming pool.

Bad Idea:
Taking a deep breath after jumping into a swimming pool.

Moby or Not Moby 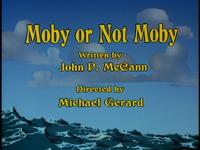 The Warners stow away onto Captain Ahab's ship. 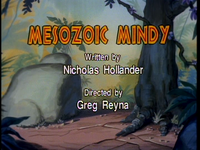 In the Stone Age, Mindy and her family are cavepeople and Mindy chases a walking dinosaur egg while her sabre-toothed dog Buttons once again protects her.

Good Idea:
Kissing a loved one.

The Good, the Boo, and the Ugly 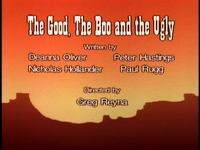 In a parody of spaghetti westerns, Chicken Boo takes on the role of "the man with no personality".

Good Idea:
Doing your own yardwork.

During the credits, in place of the water tower, the credits take place over a badly damaged Buttons whimpering in pain and waving at the audience until Mindy shows up and hugs him and he runs away. This pretty much parodies the Lassie closing credits.

Retrieved from "https://animaniacs.fandom.com/wiki/Episode_28:_Moby_or_Not_Moby/Mesozoic_Mindy/The_Good,_the_Boo,_and_the_Ugly?oldid=34325"
Community content is available under CC-BY-SA unless otherwise noted.