Animaniacs Wiki
Register
Don't have an account?
Sign In
in: Episodes, Season 1, Yakko, Wakko, and Dot Episodes,
and 4 more

All of the cartoons are animated by Tokyo Movie Shinsha Co., Ltd. 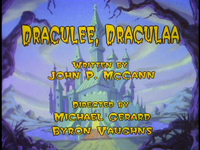 In an attempt to head towards their ancestral home of Pennsylvania (since their parents are pencils), the Warners end up at the estate of Count Dracula in Transylvania.

The Warners head towards their ancestral home of Pennsylvania (since their parents are pencils). Unbeknownst to the three of them, they've actually arrived in Transylvania. They decide to take shelter in a dark and foreboding castle instead of more sensible options. During the night, when Wakko hits the bell with his head, the front door opens and the vampire man exits a car driven by a skeleton. He asks who they were, while the most mischievous steals his pocket watch. Then the count lets them pass but they close the door in his face. When they enter the place, the count becomes angry at them because the Warners mistake Dracula for an Amish farmer. Luckily, Yakko has seen Witness twice. The count transforms into a vampire but also Wakko, using his hands, flies in the air and, with a baseball bat, he hits him, making him fall to the ground. When he gets up very dizzy, he takes them to their rooms.

Count Dracula shows them the place where Dot was going to rest, but it is completely full of horrible things like:

Soon Dot goes to bed already sleeping, suddenly Dracula is about to stick his fangs to remove blood but Yakko appears and asks him if he is going to bite her. The count is thinking, for when he is about to do it, she hists with his hands and later using a brush and toothpaste she brushes his teeth. He tries again when Dot goes back to sleep, but Wakko arrives as a dentist and removes all his teeth. Then Dot wakes up, puts them in her hair, and asks if she looks like Sheena Easton. A slumber party breaks out, and the humiliated vampire finds himself in a nightgown and covered in make-up. He flees to the safety of his coffin but, fearing he'll suffocate, the Warners cut it open with a chainsaw. He tells them that their lives have ended. Yakko agrees, since by now the sun has come up, which he reveals by opening a boarded-up window. Even as the count grows weaker, the Warners refuse to leave him alone, blowing a bugle in his ear and shoving an alarm clock into his head. Dracula explodes in anger, which succeeds in destroying his entire castle. The Warners escape with their lives, and finally figure out that they never made it to Pennsylvania to begin with. They try again, but this time end up in Tasmania, where a hungry Wakko scares away the Tasmanian Devil. They now have to find a new map.

Phranken-Runt is the fifth episode of Rita and Runt. 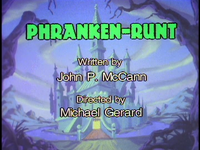 Dr. Phrankenstein, an evil mad scientist, has intentions to destroy the village off the coast from her castle with her creation, a monstrous dog named Scout. When Phrankenstein finally gets Scout on his way to the village, his circuits get damaged by lightening before he has left the castle, which leads to Phrankenstein in search of a dog brain. The solution comes shortly after.

Rita and Runt are wandering in a night storm. They had been thrown out of another home due to Runt causing an accident. They wait at the doorstep of Phrankenstein’s castle. Runt is sucked up into the castle, while Rita is locked out. She finds a way in and gets the idea that Runt is in trouble.

She makes it up into the laboratory to see Runt strapped to a table and about to have his head sawed open. Phrankenstein notices the cat. Using the table, Rita just manages to slam the scientist into an instrument panel, which electrocutes her.

Rita and Runt are chased through the castle by Phrankenstein’s pet rat, Mr. Squeak. The chase leads to a baloney and with no option, the two strays jump into the sea. Dr. Phrankenstein and Mr. Squeak are angry with Scout most of all and Wakko sitpops their favorite ball to prove a point, which leads to Scout attacking them.

On shore, Runt wants to jump off the castle again, leading to Rita to remark that Phrankenstein "couldn’t have wanted him for his brain."