Yakko's World/Cookies for Einstein/Win Big is the 2nd episode of the original Animaniacs. It originally aired on September 14, 1993.

Yakko, Wakko and Dot: Pinky and the Brain-ey!

Yakko sings a song set to the tune of the Mexican Hat Dance about the nations of the world. 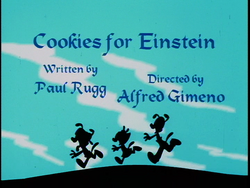 The Warners, in 1905 Germany, inadvertently help Albert Einstein discover the theory of relativity through their attempts to sell him cookies with The Acme Song. 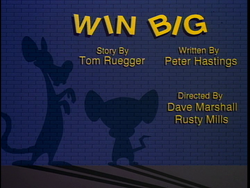 The Brain wants to win $99,000 so he can finish his device to take over the world on the show Gyp-Parody, but ultimately loses when he doesn't know what classic TV character was known for saying, "Bang! Zoom! Right in the Kisser!" (which Pinky does know).

Brain: Pinky, are you pondering what I'm pondering?
Pinky: I think so, Brain, but, where are we gonna find a duck and a hose at this hour?
Brain: Honey, I'm home.

Brain: I am not devoid of humor.

The plans for the Infindibulator. 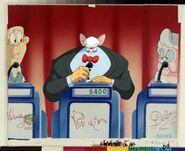 The moral of the story is: "If at first you don't succeed, blame it on your parents."