Warners Unbound/How to Brain Your Dragon/Suffragette City is the second episode of the Animaniacs reboot.

The Warners vacation in Ancient Greece. Pinky & the Brain try using a dragon to rule the world. [1] 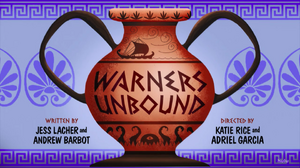 In Ancient Greece, The Warners are greek gods, who decide to take a vacation leaving Mount Olympus. The Warners go to an island where they have their vacation. But right after getting settled in, the Warners butt-heads with Odysseus and his crew, who splash the siblings making them very angry. The Warners return to Mount Olympus to torment Odysseus, but instead he loves what they do. The last option they decide is to put him on an island inhabited by a Donald Trump-esque cyclops. Odysseus is tormented, and begs the Warners to let him off the island. The Warners agree, and let him go home. The Warners also try to get rid of the cyclops, but the roman gods made him a demigod, so he can't be destroyed.

How to Brain Your Dragon

In medieval times, Pinky and Brain overhear of a terrible dragon, saying if anyone tamed it, they could take over the world. Brain likes the idea, and escapes his cage with Pinky in search of the dragon. When Pinky and Brain arrive, they discover that the dragon is passionate for the arts, and an actor named Benedict. Brain decides to give up, but then realizes that he could make Benedict act out him slaying the dragon, and he would get the kingdom. Pinky and Brain act out slaying Benedict in front of the king, who promised Brain if he slayed the dragon, he could have the kingdom. Once Brain pretends to slay Benedict, he wakes up asking how he did. The king is shocked about the charade, and puts Pinky and Brain in the dungeon. In the dungeon, Brain prepares for his next scheme to take over the world.

Dot sings a song about how women gained the right to vote. Once she finds out that cartoons can’t vote, she begins a movement to bring together cartoons of all kinds. This protest attracts many people, and becomes breaking news. Dot proposes the idea to congress and then cartoons are allowed to vote.