The Mime gets attacked by a swarm of bees. 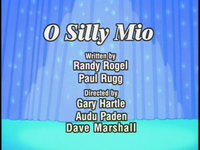 After their stained glass window of Weed Memlo, their first director, is destroyed by an operatic prima donna's high notes, the Warners get revenge on her during her performance of Carmen. 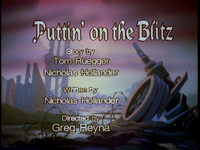 In the midst of the Nazi invasion of Poland, Rita and Runt go along with a little girl on her own named Katrina who's trying to avoid the enemy and reunite with her father. Rita saves her by fighting and frightening away an aggressive hound. Katrina decides to adopt them both after finding her father.

In the end, Katrina and her father are reunited (which Rita and Runt previously doubted would happen) and escape Poland via train. While Rita and Runt chase to get on, the hound shows up and Runt stops him from attacking Rita again, unfortunately causing him to miss the train while Rita is on bored with a new family. However, Rita jumps from the train right at the last moment, leaving Katrina and her father and stays with Runt.

The Great Wakkorotti: The Summer Concert 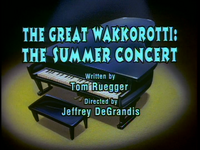 The Great Wakkorotti returns to belch his way through Amilcare Ponchielli's Dance of the Hours.

The Mime gets pummeled by falling rocks.

Runt: It's over. It's definitely over.

Retrieved from "https://animaniacs.fandom.com/wiki/Episode_31:_O_Silly_Mio/Puttin%27_on_the_Blitz/The_Great_Wakkorotti:_The_Summer_Concert?oldid=38027"
Community content is available under CC-BY-SA unless otherwise noted.