The Warners escape through a garden hose that Ralph uses. 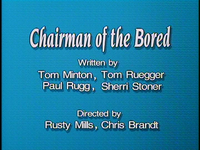 At a big dinner, the Warners meet a fellow named Francis "Pip" Pumphandle, who keeps on droning on and on about random stories involving Bob Barker and balogna and cheeseballs and they try in haste to avoid him.

Yakko sings most of the planets (including Pluto, which was considered a planet at the time) in the solar system, but at the end, Wakko tells him that he forgot Uranus, to which Yakko replies, "Goodnight, everybody!" 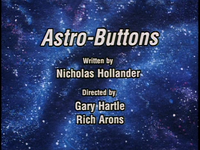 Buttons, Mindy and her family are space-people in an intergalactic setting. Mindy chases her space-orb while Buttons chases her.

At one point, there is a parody of Star Trek.

Retrieved from "https://animaniacs.fandom.com/wiki/Episode_32:_Chairman_of_the_Bored/Planets_Song/Astro-Buttons?oldid=31514"
Community content is available under CC-BY-SA unless otherwise noted.