Wakko complains of having a headache.
Yakko discovers that Wakko has a cartoon stuck in his ear. 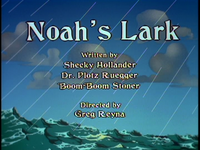 The Hip Hippos pester Noah on his ark, while believing it to be a cruise ship.

Wakko complains he's got something in his eye.
Dot sees that the next cartoon is in his eye. 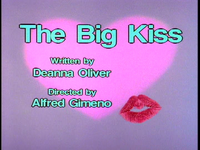 Chicken Boo poses as the sexiest actor in Hollywood filming a major kiss scene with an actress who resembles Hello Nurse.

Wakko complains of a toothache, and Yakko
sees that the next cartoon is in Wakko's mouth. 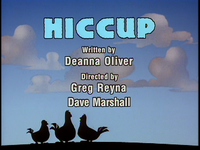 Squit has a bad case of the hiccups after eating a bread crumb, so Pesto and Bobby attempt to get rid of them.

Yakko and Dot do their presentation to the press on Wakko's pains recapping what happened to him throughout the entire episode. After asking him how he feels, Wakko replies that his bottom hurts. Yakko simply looks at the camera and says, "Mwah, goodnight, everybody!"

Dot: [pointing to the camera] So don't miss it!

Retrieved from "https://animaniacs.fandom.com/wiki/Episode_33:_Cartoons_in_Wakko%27s_Body/Noah%27s_Lark/The_Big_Kiss/Hiccup?oldid=31813"
Community content is available under CC-BY-SA unless otherwise noted.