Animaniacs Wiki
Register
Don't have an account?
Sign In
Advertisement
in: Pages with inline Wikipedia links, Episodes, Season 1,
and 8 more 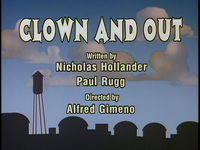 Thaddeus Plotz hires a clown for Wakko's birthday party, unaware that Wakko has an irrational fear of clowns, referred to by Dr. Scratchansniff as Clownophobia. It's even worse than his own. Wakko does everything in his power to get rid of the clown, resulting in the clown being sent to the planet Mars. Once on Mars, the clown gets an audience of Martians who like his act.

Wakko screaming strangely at the clown.

On the chalk board Brain writing a formula starting E=mc² and ending THX 1138 which is a movie that started George Lucas career. Also Sq root of BH 91210 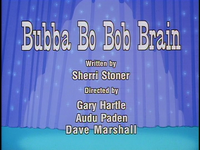 The Brain poses as country singer Bubba Bo Bob Brain with Pinky as his manager. He plans to put subliminal messages in his songs to get whoever is listening to the songs to make him their world leader.

Dolly: I want you to know that I'm your biggest fan.
Brain: I'd say puberty was inordinately kind to you.

Brain: It must be inordinately taxing to be such a boob.

Pinky: You have no idea.

The moral of today's story is:
"Elvis lives on in our hearts, in his music, and...in a trailer park outside Milwaukee."