And now for something completely different. For today's very special show, the Warners have mixed up all the cartoons....Let's see what they have come up with, shall we? 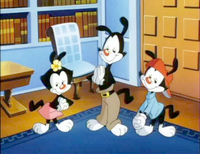 Today is a very special episode of Animaniacs. What makes it so special? Wakko's not wearing any pants! 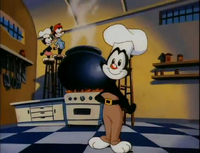 In the Animaniacs Test Kitchen, Yakko is cooking up something. He sings that the ingredients are all the stars of the show. The Warners look in the cauldron to see what they have come up with.

In the Garden of Mindy 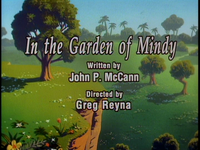 In a spin-off of Pinky and the Brain (Mindy and the Brain), Brain, replacing Buttons, tries to prepare a plan for world domination, all the while watching over Mindy's mischief. However, this does not go well as planned for Brain as he ends up bruised, dizzy (due to being played with by Mindy), and smelling rather horrible (due to falling in manure). Brain also is reprimanded by Mindy's mother (for "allowing Mindy to feed him old cheese") rather than Buttons. Brain remarks in a deadpan manner how he hates being chided and tomorrow he will make another world domination plan, ("but first, a bath"), as he puts on a shower cap and gets into a bowl of soapy water.

Pinky and the Cat 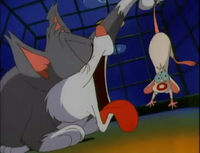 In a short segment, Rita is in the Acme Labs cage with Pinky, but she eats him up. She declares that this is, so far, her favorite episode. Surprisingly, Pinky says that he likes it in Rita's stomach, saying there's "roomy accommodations".

We've Been Mixin' Up the Scripts

The Warners are at a conveyer belt singing, to the tune of "I've Been Workin' on the Railroad", about how they are mixing up all the scripts. (note: Animaniacs is supposed to have no script anyways) 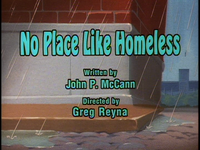 Runt, who has been paired with Pesto, drift outside the inner city until they reach the suburbs. Runt finds a place to live with a kind old woman, however she hates pigeons. She also has a pet parrot named Crackers, who hates other pets and tries to instigate Runt. In the end Pesto saves Runt in his usual manner, by beating up the parrot. This causes Runt to be banished from the old lady's house, who believes both Pesto and Runt were involved in a conspiracy to harm "her precious Crackers". Back out on the street, Runt says that Rita always sang to him to cheer him up. Pesto agrees to do that, humming an Italian song. 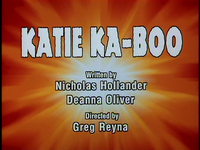 Katie Ka-Boom brings home her new boyfriend to her family, C.B., who happens to be none other than Chicken Boo. As expected, she explodes when her family tries to convince her that her boyfriend is actually a giant chicken.

A very short segment where Dot takes the place of Slappy. Yakko and Wakko are singing offscreen "This short cartoon features Dottie the Squirrel". Dot brusquely responds that her name is Dot; "Call me 'Dottie' and you die". The songs finishes with "That's Dotty!" Dot says "I warned you" and throws a bomb at the camera. The song is a remake of the original one of Slappy Squirrel. 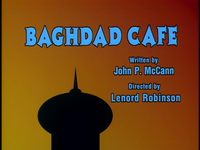 Slappy finds herself involuntarily taking the place of Dot in a cartoon where the Warners mistake an Iraqi palace for the Baghdad Café. The dictator, named "So Darned Insane", a takeoff of Saddam Hussein, tries to convince them this is not a restaurant. The dictator also thinks they make an unlikely pair of siblings, as it was evident "Slappy is 10,000 years older than sand", to which Yakko ad libs a line saying "She is adopted". Slappy asks for Skippy Squirrel, but instead sees Flavio Hippo saying "Aunt Slappy!". She quickly realizes Flavio is not her nephew and sends him away. After several confused attempts at Dot's catchphrases, she just ends the cartoon by putting dynamite down the dictator's pants. Outside in her hotrod, she says to the viewers, "Next time, I'm gonna ask for script approvals."

The moral of today's story is: "You can teach an old dog new tricks, but you can't teach Madonna to act." (Ouch.)

Retrieved from "https://animaniacs.fandom.com/wiki/Episode_35:_Very_Special_Opening/In_the_Garden_of_Mindy/No_Place_Like_Homeless/Katie_Ka-Boo/Baghdad_Café?oldid=38443"
Community content is available under CC-BY-SA unless otherwise noted.