Yakko, Wakko and Dot:
Pinky and the Brainy... 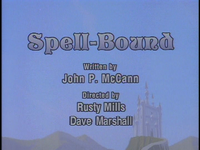 This is a full Pinky and the Brain episode.
Written by John P. McCann
Directed by Rusty Mills and Dave Marshall

Retrieved from "https://animaniacs.fandom.com/wiki/Episode_38:_Spellbound?oldid=38096"
Community content is available under CC-BY-SA unless otherwise noted.