Dot recites her interpretation of
"Jack Be Nimble". 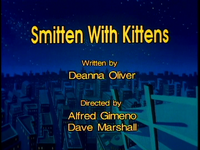 Runt finds a group of baby kittens who cling to Rita as their mother.

Dot recites her interpretation of
"This Little Piggy". 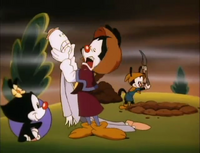 Yakko, with Mr. Skullhead playing the skull of Yorick, does the "Alas, poor Yorick" soliloquy from Shakespeare's Hamlet, while Dot "translates" for the viewers at home. In the background, Wakko keeps digging a big hole and finds interesting things, including Cher, and the next cartoon. 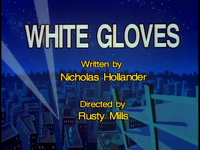 While playing piano, Wakko's gloves take on a life of their own.

Good Idea: Playing the accordion at a polka festival.

The moral of today's story is:
"Early to rise and early to bed / Makes a man healthy, but socially dead."

Dot: I can't think of the ending to this show.

Yakko: (as Groucho Marx) I can't think of anything else.

Retrieved from "https://animaniacs.fandom.com/wiki/Episode_39:_Smitten_with_Kittens/Alas,_Poor_Skullhead/White_Gloves?oldid=29577"
Community content is available under CC-BY-SA unless otherwise noted.