The Warners escape the water tower using a long wooden plank and a go-cart. 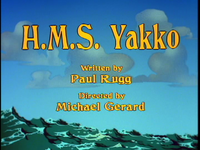 Yakko, Wakko, and Dot trespass on Captain Mel's beach, and he tries to use everything within his power to make them leave. 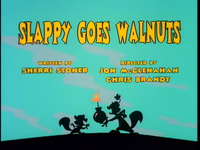 After tasting disgusting cereal that Skippy likes, Slappy goes head to head with a dog guarding a walnut tree to get some walnuts.

Slappy: Look, you've seen all my old cartoons, right?
Skippy: About a trillion times!
Slappy: I've wrestled with Walter Wolf, Sid the Squid, and Beanie the Brain-Dead Bison. This Doug guy here is nothin'.
Skippy: Yeah, but those were cartoons and this is real life.
Slappy: [to the audience] Don't tell him. He might crack.

Slappy: [to Doug the Dog] You remind me of a very young Scooby-Doo.

Music and Lyrics by Randy Rogel
Directed by Alfred Gimeno

Yakko sings a song about the vastness of space and the smallness of us compared to it.

Yakko, Wakko and Dot: We are the very models of cartoon individuals!

Retrieved from "https://animaniacs.fandom.com/wiki/Episode_3:_H.M.S._Yakko/Slappy_Goes_Walnuts/Yakko%27s_Universe?oldid=38665"
Community content is available under CC-BY-SA unless otherwise noted.