Gold Meddlers/Pinko and the Brain/Math-Terpiece Theater: Apples is the third episode of the Animaniacs reboot.

The Warners are camping out, only to be camping on the torch relay of the Greek games. The champion, Nils Niedhart, throws them out of the stadium. The Warners get angry and arrive back and decide to challenge him in the Greek games. Nils tries his hardest skills, but the Warners win all the sports through zany antics. Nils throws a tantrum, while the Warners get a truckload of gold medals. While Nils cries, the Warners assume there's chocolate in the medals. After finding out it's solid gold, the Warners give their medals to Nils. The medals are too heavy, and Nils falls underground into Hell. 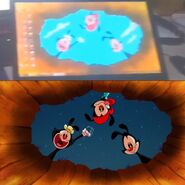 Comparsion between the leaked version of Gold Meddlers from April 2019 (top), compared to the final version (bottom)

Pinko and the Brain

Pinky and the Brain are presented to a well-known senator named Garp as a gift. Brain plans to take Garp's place and blackmail every politician until he's the only one left, allowing him to take over the world. Brain tells Garp that kids are allowed to ride on the swing and Garp runs from his office. Brain goes into a mechanical human suit that he built to pose as Senator Garp. Brain arrives in the office, and a worker named Brie notices something off. Brie comes into the office to find Brain talking with Pinky, causing her to drop the mug and run. Brie tells the other workers what she saw, but Brain makes an alibi that Pinky is an Italian friend of his. The other workers belive him, but Brie is suspicious. Brain as Senator Garp charges politicians who look or act like a mouse, and puts them in prison.

After Brain has succeeded, he finds Brie rummaging through his files. Brain becomes suspicious, and decides to accuse her as a mouse at a conference, which makes Brie protest. Brie accuses of Brain and Pinky being mice, but Brain pretends to prove it by showing Pinky and how he's not a mouse. Pinky gets nervous and blows his cover, making everyone shocked. Brain escapes by rocketing through the wall, and puts Pinky in his pocket. Brain says that they must prepare for the next scheme to take over the world as the two crash into the Washington Monument.

Dot presents a dramatic math lesson calling it a “Tale of Betrayal”. It involves a poverty-stricken woman named Nancy, who has five apples that she stole. In a chase away from a cop, she loses two apples. One apple is taken by a dog, and another is taken by her child who chucks it at the cop. How many apples does she have left? Three. As the segment draws to a close, a future problem is alluded to involving “Train A” traveling at 40 miles per hour that left the station at 2:45.