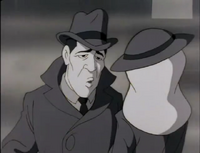 In this parody of the final scene from Casablanca, Dot is the Ingrid Bergman role and she says, "Hellooooo, Nurse!" to eBogie.

Wakko draws a door and an elevator button on the tower. Yakko presses the button, and Dot is inside as the elevator operator. The tower goes down and the Warners escape. 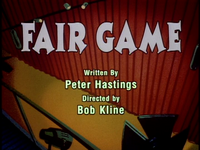 The Warners compete on the game show Quiz Me Quick, where they torment the host, Ned Flatt.

Ralph follows the Warners into a building. In the episode's second elevator gag, the Warners go up one elevator and go down another. Ralph, however, only goes up and down the same elevator. 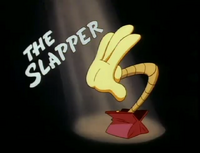 Slappy and Walter Wolf star in an ad parody of the Clapper. 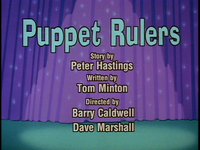 In 1954, Pinky and the Brain's latest world domination scheme involves them appearing on a popular children's puppet show. Unfortunately, when the "frozen in time" part is also accomplished, things are less than expected.

The moral of today's story is:
"Vote early and vote often."

In the show's THIRD elevator gag, the Warners return to the water tower via an elevator button from Wakko's gag bag. Wakko pushes the button, and the tower goes down to take them up. Ralph pushes the button and an anvil falls on his head. The Warners just shrug and go back into the tower.

Retrieved from "https://animaniacs.fandom.com/wiki/Episode_40:_Casablanca_Opening/Fair_Game/The_Slapper/Puppet_Rulers?oldid=29979"
Community content is available under CC-BY-SA unless otherwise noted.