Buttermilk, It Makes a Body Bitter

Slappy stars in this parody of advertisements for Milk, whose slogan at the time was "It does a body good." 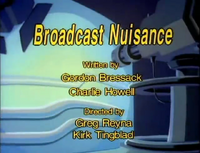 The Warners act as delivery people from "Sam 'n' Ella's Coffee Shop" to deliver a sandwich for noted news anchor Dan Anchorman. However, Dan doesn't even get his sandwich (as it is eaten by Dot) and refuses to tip them, and they end up tormenting him throughout his broadcast.

Good Idea: Having breakfast served to you in bed.

Bad Idea: Having tennis balls served to you in bed. 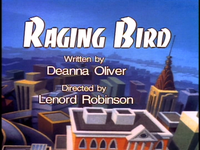 The Goodfeathers star in a parody of Raging Bull, with Bobby, naturally, in the Robert DeNiro role.

Good Idea: Whistling while you work.

Bad Idea: Whistling while you eat.

Slappy: It's ovah! Go away!

Retrieved from "https://animaniacs.fandom.com/wiki/Episode_41:_Buttermilk,_It_Makes_a_Body_Bitter/Broadcast_Nuisance/Raging_Bird?oldid=30891"
Community content is available under CC-BY-SA unless otherwise noted.