The Warners interview Cappy Capbarnhouse, an animator from the early days of Warner Bros. animation. He claims that the original purpose of the studio was to make pies, but Leon Schlesinger suggested they make cartoons instead. He talks about how Rudolf Ising and Hugh Harmon created the characters of Bosko the Talk-Ink Kid and Honey. The Warners hardly pay attention to him because he bores them.

Cappy keeps talking on a tangent and the Warners keep getting bored. So the Warners get a television onto the stage and watch the next cartoon. 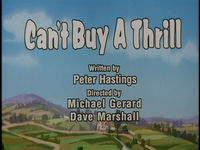 The Hip Hippos are bored, and want to try out dangerous stunts, but Gina Embryo, a la Buttons, attempts to protect them from danger without getting harmed herself.

Cappy is still speaking and the Warners are even more bored than ever. So they replace themselves with stuffed dummy versions of themselves and finally free themselves of Cappy's drivel. 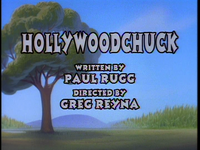 Young Baynarts Woodchuck leaves his small town, changes his name to Charlton, and takes off for the glitz and glamor of Hollywood. However, he soon discovers that being an actor is not all it is cracked up to be.

The Warners wish each other goodnight, but then wonder what happened to Cappy. We cut back to the studio where Cappy is sleeping and the dummies of the Warners are still seated. The head of the Yakko dummy falls off and Cappy says, "Pies! We made pies." and falls back to sleep.

Retrieved from "https://animaniacs.fandom.com/wiki/Episode_42:_Animator%27s_Alley/Can%27t_Buy_a_Thrill/Hollywoodchuck?oldid=29580"
Community content is available under CC-BY-SA unless otherwise noted.