Every single cartoon in this episode, with the exception of the chase transition, is animated by Freelance Animators, Ltd.

Of Nice and Men 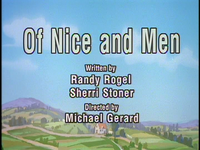 Runt gets adopted and finds himself taking care of a rabbit farm, while Rita is relegated to rat hunting.

It's Always The Same Thing With Cats (Rita)

Cow: Moo.
Rita: Moo yourself, ya lower lifeform! [she gets flicked off the cow by the cow's tail and bumps into a wall] That's two minutes in the penalty box...for clipping.

Rita: (after hearing Runt sing) Hey, it's a cartoon. What did you expect? Sondheim? 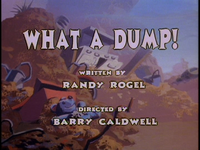 Mindy's Mother gets her daughter a brand new doll to play with and throws her old doll out. When Mindy sees her doll in the trash, she chases the garbage truck to a landfill and recycling center leaving Buttons, once again, to chase and protect her.

Ralph chases the Warners at the studio gate. 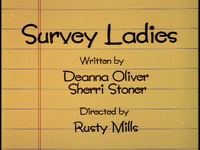 The Warners go to the mall to find the perfect birthday gift for Dr. Scratchansniff. They get constantly interrupted by two pesky survey ladies who want to ask them such benign questions as "Do you eat beans?", "Do you want to see a new movie starring George Wendt?" and "Do you eat beans with George Wendt?".

Retrieved from "https://animaniacs.fandom.com/wiki/Episode_43:_Survey_Ladies/Of_Nice_and_Men/What_a_Dump!?oldid=29379"
Community content is available under CC-BY-SA unless otherwise noted.