Dot stars in a parody of the Mary Tyler Moore show opening sequence. 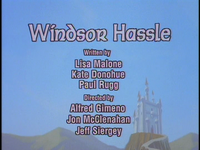 A British presenter attempts to do a serious documentary about Windsor Castle in Britain and the damage it suffered following the fire in 1992. However, the kids at home would rather see a cartoon.

The Warners work with the queen of England to restore Windsor Castle after the 1992 fire.

After the commercial break, the Queen's mother attempts to do the documentary again, but an anvil falls on her.

...And Justice for Slappy 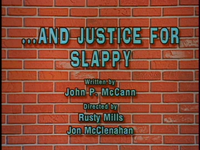 Slappy is on trial for putting Walter Wolf in traction. Both Walter and Skippy tell distorted versions of what happened, before Slappy is called to the stand to tell what really happened.

The moral of today's story is: "Possums have pouches like kangaroos." (What?)

Retrieved from "https://animaniacs.fandom.com/wiki/Episode_45:_Mary_Tyler_Dot_Song/Windsor_Hassle/...And_Justice_for_Slappy?oldid=30974"
Community content is available under CC-BY-SA unless otherwise noted.