The Thanksgiving episode of Animaniacs and every segments in this episode was animated by Tokyo Movie Shinsha, Ltd. 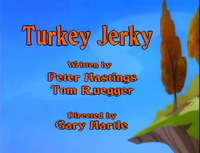 Miles Standish: Oh I didst love that hamster so. I tooketh him with me to bed every night, you know.
Yakko: Goodnight, everybody!

Miles Standish: Begone, pests! And give me the bird!
Yakko: We'd love to, really, but the Fox censors won't allow it. 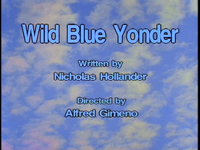 In this miscellaneous cartoon, a newly hatched bird tries to find its mother and ends up following a stealth fighter.

The moral of today's story is: "Don't eat with your mouth full."

Yakko, Wakko and Dot: We're coming over for dinner!

Retrieved from "https://animaniacs.fandom.com/wiki/Episode_46:_Turkey_Jerky/Wild_Blue_Yonder?oldid=29886"
Community content is available under CC-BY-SA unless otherwise noted.