The Warners get chased by Ralph out of a sewer hole. 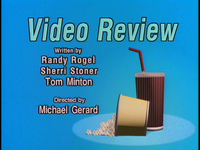 The Warners star in this cartoon patterened after the Looney Tunes "bookstore come to life" cartoons, taking place in a video store.

When Mice Ruled the Earth 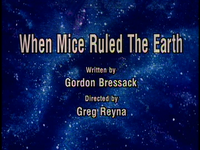 Pinky and the Brain use H.G. Wells' time machine to travel to prehistoric eras to take over the world.

Dot and Wakko do not want to do the Wheel of Morality again, until Yakko mentions that it was Fox's idea to do it.

The moral of today's story is: WIN A FREE TRIP TO TAHITI!!!!!

Instead of the chase ending, the Warners and Ralph go onto a stage to sing a parody of Carol Burnett's "I'm So Glad We've Had This Time Together".

Retrieved from "https://animaniacs.fandom.com/wiki/Episode_47:_Video_Review/When_Mice_Ruled_the_Earth?oldid=42980"
Community content is available under CC-BY-SA unless otherwise noted.