Animaniacs Wiki
Register
Don't have an account?
Sign In
Advertisement
in: Episodes, Season 1, Yakko, Wakko, and Dot Episodes,
and 3 more

In the original airing of this episode, the last line is changed to "Chicken chow meiny".

Dot recites her rather morbid interpretation of "Mary Had a Little Lamb," called "Requiem for a Lamb." It is only 1 sentence long: "Mary had a little lamb with mint jelly." 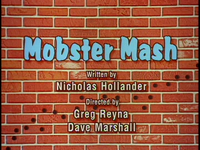 The Warners pester a mafia don (a parody of The Godfather) in an Italian restaurant because mafia tried to take the booth the Warners had been sitting in just because it was his booth.

An anvil falls on The Mime.

The Warners sing a song about Lake Titicaca...probably the naughtiest song ever sung on Animaniacs.

Colin walks out of the house all wet wearing nothing but a towel and talks about how Randy Beaman's cat eating a fish. Before he walks into the house, his towel falls down exposing his rear end. 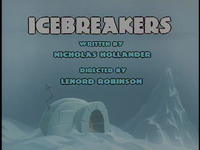 Buttons and Mindy appear running but have no lines.